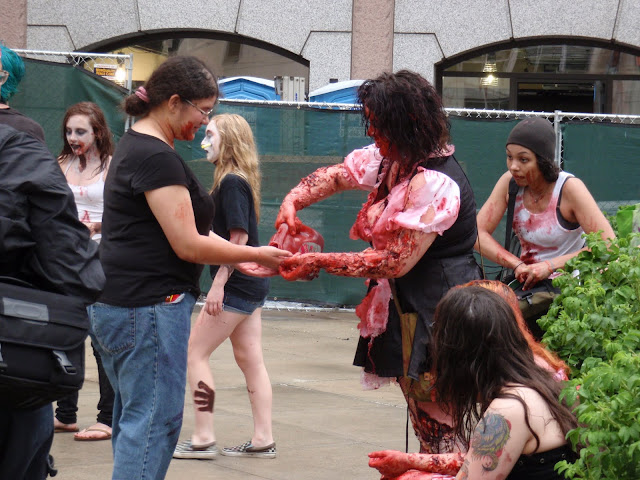 sitting in the subway there was a couple putting blood stains on themselves with red paint. the guy wound a bandage around his head, and the girl was putting one around her knee. a party, we thought?
somewhat later while leaving prudential center, many, many scary-looking people were walking towards the food court entrance of Prudential. the stream of people seemed endless... and the wounds all over their bodies looked very real.... must have been scary, sitting in the food factory, eating your fries.. and suddenly all these zombies coming in. i think there were like 500 zombies flooding prudential center. but as sudden as they appeared, they were also gone again.
what it was? no clue! and so far i have not been able to find anything on the internet about it..
in this pic the girl is "handing out" blood......
Tweet
Pin It
Labels: boston sightseeing, photographing strangers, prudential
Posted by CaT at 12:02 AM

cool! i liked also the guys that were in SWAT suits -zombified..