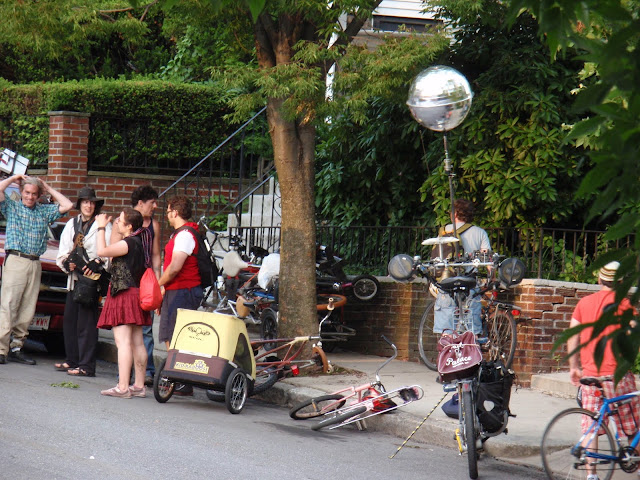 sitting on the couch, around 11 in the evening. saturday. suddenly a lot of music outside; and yes, there they are again: the bikers. with lots of lights.. one with a discoball (see pic). the bikes look weird.. with very high handlebars. it seems they are gathering at the house with the sign "egobama is a liar" (see post "nice neighbour"). last saturday they met up there around noon, and we heard them again around midnight! were they biking that long? first time i kind of saw them, i thought i was imagining it; it was on the same evening as when a car toppled upside down. but just now i did some googling, and yes, it is a "bike gang", called SCUL (subversive choppers urban legion). according to a blog i just found (they are not easy to find on the net!), they are a non-profit, artistic, bicycling nerd gang based in Somerville. their missions are every saturday, when they head off from a secret base (our street, apparently!) on their ships (i.e. bikes), and the "fleet's flag ship" is responsible for the loud music. the bikers are called "pilots" and us, the normal people, are "civilians". isnt that just veeerrrryyyyy weird?
and no, i am not making any of this up: http://turingcompletewasteoftime.blogspot.com/2007/09/how-i-accidentally-joined-bike-gang.html (describing the gang), and the gang's own website that is very obsure to me, and supposedly so: http://www.scul.org/skynet/index.php
i do miss my bike a lot (havent been on one since leaving the netherlands), but not that much to join this gang... :)
Tweet
Pin It
Labels: somerville
Posted by CaT at 11:24 PM

then u first have to find a sponsor!!

hello! we are from holland, the nr1 bike country. They will sponsor us. Maybe we should write a sponsoring proposal?