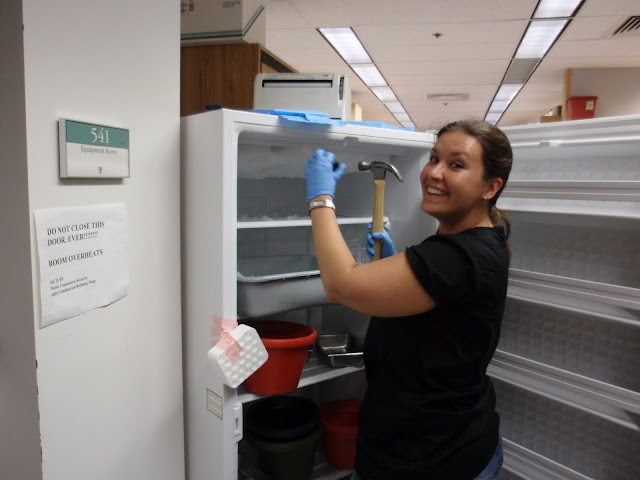 yesterday should have been post number 100, and a reason to celebrate and/or contemplate... no? instead, the neighbouring lab convinced me that unplugging a freezer diminished in size by half due to ice was a good idea. at 5 in the afternoon. then i could let it defrost overnight and in the morning i would have a clean freezer! at least they were helpful. but when the thawing began, the water started to flow. and it was not a little bit of water..... in fact, i was the only one really worrying about that water; they all said: so what? then tomorrow there is a pool. doesnt matter, right?! but i thought it did matter, and around 7 i hammered away already quite some chunks of ice, finding in there loads of eppendorf tubes and other stuff i do not want to remember. tim came to help me (my 2 colleagues long gone) and an hour hammering later we went for dinner (Panera Bread: i love it! although it is a little too much, as usual), and then we continued. i felt like being on a gletcher expedition. but i didnt enjoy it and surely the view wasnt as nice.
after ten it was when we left, the freezer still not being entirely ice-free. but now its empty and i rearranged it all, and all the old stuff, scattered over the entire thing now easily fitted on one shelf; all the other shelves left for me! jeeeeejj! now i can finally do (more) experiments.... ;)
Tweet
Pin It
Labels: CaT, lab, work
Posted by CaT at 2:12 PM

well.... i found (i think) mouse embryos, but i thought at first they were kids toys (some small plastic piglets or so... but upon a closer look.... yegh!), and i found some chemicals of which i had no clue what they were, only the warning i could see: dangerous, toxic! and the "bonnetje" from the freezer was still under all that ice somewhere, so i think that stupid thing never ever had been thawed since it was placed there, prob 8 years ago...

it means we are here more than 100 days!! longer than i have ever been in the US of A!