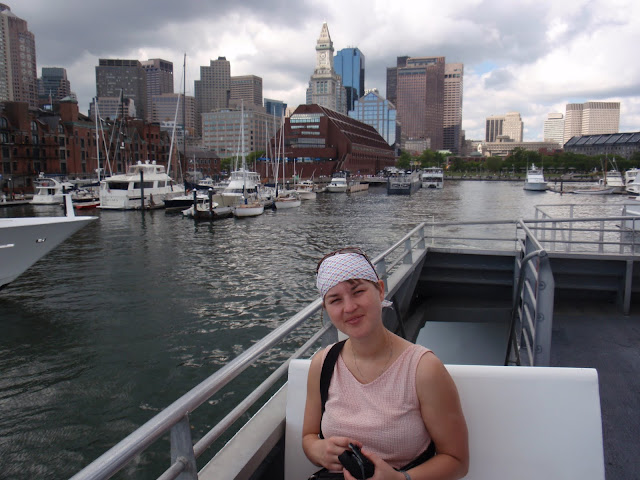 so this is why tim wanted to get martini!! he knew sylvia was coming over from San Diego.....!!! on saturday early morning, there suddenly was someone in our fancy apartment, while i was showering (tim told me i had to get up immediately for a surprise, and i had just heard him talking on the phone). and then... there was sylvia!!! jeeejjj!! we had a swim in "our" pool, we went to boston and got in a heavy rainstorm causing flooding of the subway (later another post on that), and we went to amherst to visit patrick and his wife anne!! we had a perfect dinner on their porch and when we left it was late.. when we got home, a 2 hour drive, it was even later.... :)
on sunday more sightseeing- we took a ferry-, watching the soccer game with yvonne & wouter who were here to apply for postdoc positions! saw harvard square and all, dancing & singing spanish girls in the subway (buuuuuuhhhhh... we were the only orange there), more swimming and then the weekend was gone again, it went soooo fast even though we cut back on sleep... :(
it was a great surprise!!!! :)
(and surely more pics later about everything and nothing)
Tweet
Pin It
Labels: boston sightseeing, on the water
Posted by CaT at 11:12 PM

because of the previous post reason we did not have any martini with sylvie. actually, we did not drink much at all!! but it was fun (and tiring, yes).. especially for sylvia i think! she slept in the car and i took a picture ;)

what a picture sleeping in the car? and you were driving!! yes it was great and late. I really enjoyed my visit!! hopefully soon again!!!!

yes, dont tell me!!! he asked if i wanted to take the pic, but i didnt want to wake you up. then he did it himself, even so i forbid him....