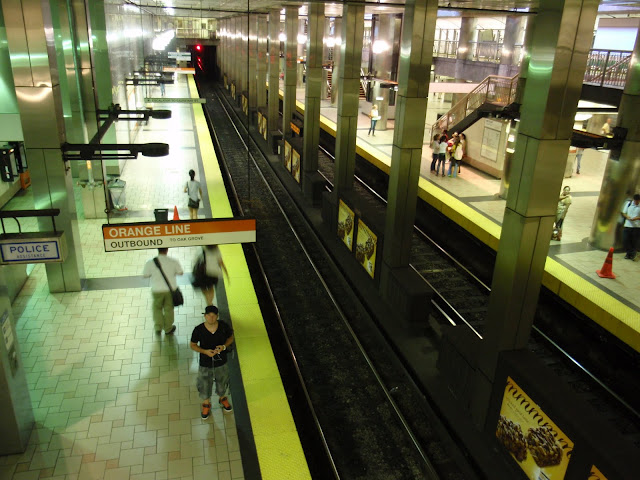 at north station i change from the orange line to the slow green line. in fact i can also stay in the orange line to Ruggles, but then i have to either catch a bus or walk 20 minutes. the buses here dont keep their schedule very well, and thus i almost always take the green line, however slow.... :) besides, I prefer north station over Ruggles. and usually tim is already there waiting for me..
what i notice here, is that people do not like to sit next to me. whenever there are free seats available, people next to me move away. the first 3 months i thought there was something specifically wrong with me. so then it is good again to have american colleagues... :) apparently many americans have "problem with personal space" and thus keep as much distance from strangers as possible (unless the train is really really full; then they just push themselves in, as everywhere else). pfew. that was good to hear... :) i also asked if i am expected to do the same when sitting next to someone and another free spot becomes available, but they said i am not.. pfew again... (at first i though i should have listened to the advice in my "orientation" handbook, namely "do not use any perfume, as americans are oversensitive to that". ah well, maybe it is me after all... :S
Tweet
Pin It
Labels: green line, MBTA, orange line, real americans, tim
Posted by CaT at 6:37 PM

who's that handsome guy?

with the orange laces?

here they even prefer their personal space in cars, so they keep a long distance to the car in front of them. If I then back up at the traffic light they keep driving away, until there is no more space left...

what kind of handbook is this?

really? how weird.....
the handbook we got sent home, together with the DS2019 as a guide to US-life or something. but developed by Partners (which is Brigham hospital, harvard, MGH etc etc).

why do you drive back at the traffic lights? thats dangerous! :)

no, i think shes driving forward up to the car in front, and then that car moves forward too!