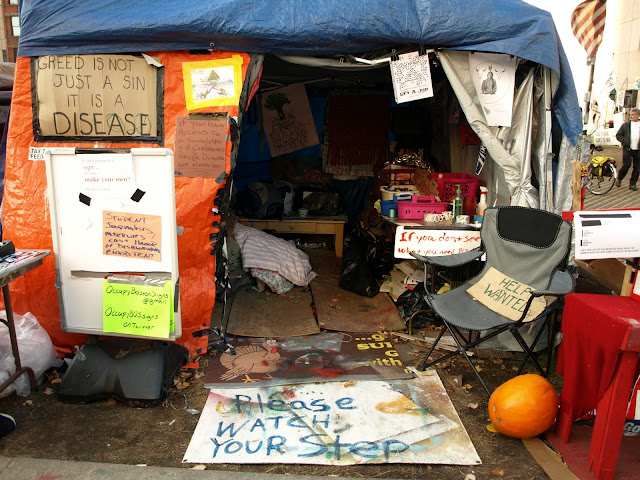 the day after thanksgiving is called black friday... most stores have lots of discounted goods for the real americans. some stores opened at 4 this morning, others already at midnight... and some fanatics just skipped their thanksgiving to camp out in front of whatever store has whatever discounted product they want to buy. as you can see here; those people planted themselves in front of a store at 1 in the morning of thanksgiving, and spent 24 hours just to be the first allowed inside upon opening. why? because the most heavily discounted things will run out, and what if you miss out on all those amazing deals?! but well, nobody is harmed when you sit outside a mall for 24 hours, while everyone else is enjoying a nice thanksgiving.. :) on the other hand... in los angeles there was a lady who pepper sprayed 20 people as to prevent them from getting stuff she wanted to buy. other than that, there were some shootings and burglaries, as you can read here. we were briefly thinking to go and check out some mall at midnight yesterday, just as observers... but the thought of so many shoppers gone crazy... made me tired and we just went to sleep.. anyways, i found some pis of crazy bargain hunters here..
of course, occupiers around the nation had some opinion about this day too (actually the pic above i took at occupy boston; this is the tent where they make signs, to state the obvious). i just saw on the occupy boston facebook page that some occupiers went to meditate in some mall, apparently around a vending machine (to prevent shoppers from buying something to eat/drink?), and one got arrested.
they are all crazy!!! the best bargain would be when staying at home, buying NOTHING!! but i have to admit, this evening we went for a little shopping ourselves. it was quite crowded, and the discounts not that amazing, so i only bought a pair of shoes... as if i needed those... ;) (but they were only 14 dollars!! from 55 originally...)
Tweet
Pin It
Labels: shoes, shopping, tradition, weird sign
Posted by CaT at 12:23 AM

Consumption, people always want a bargain. When I see a low priced sale, I always feel attracted to, that is weird, I don't need the stuff but it always ends in buying something, like shoes....

I'll pass too. I'll shop when and IF I want to. People, basically, are crazy. Count on it. hahaha