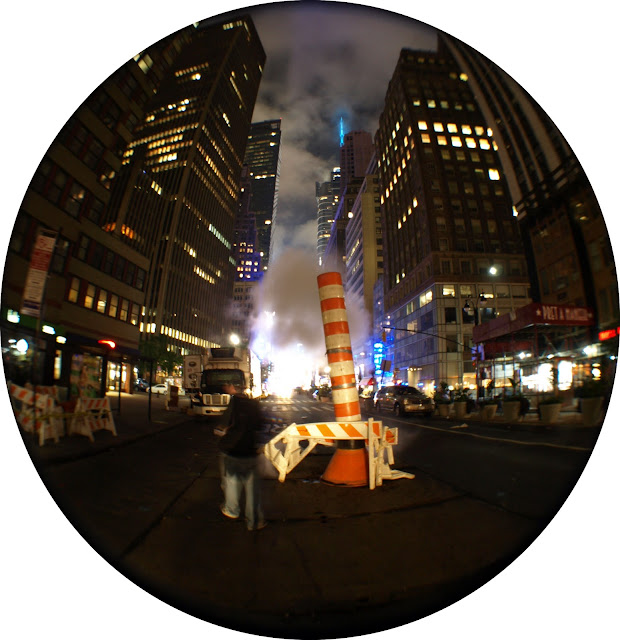 i have had this pic in my "to-maybe-post-someday" folder for quite a while now, until i saw this beautiful pic today, and a link to more info about the steam you often see in new york streets. now i spent most of this evening reading about steam, haha!
what did i learn today? well, first check this diagram, showing whats all going on underneath your feet in new york, as if whats around you isnt yet enough... steam is generated by heating water up to 1000F, turning it into... steam; every hour, approximately 125,000 gallons of water are turned into more than one million pounds of steam, which is then delivered through the steam pipes underneath the ground to many buildings in the city. its used to heat, cool or supply power. since 1882, steam has been provided to manhattan. sometimes you see steam coming from the manhole covers, which allows for nice pics (as you can see in the first link). interestingly, manholes were renamed "maintenance holes" somewhere in california, out of concern for for gender equality. hahaha! this steam can be dangerous too, as you can read here, steam pipes sometimes explode sending hot steam up in the air; the average steam pipe is 54 years old, but some are as old as a 100 years!
so what are those orange chimneys? they surround a steaming manhole and are there to make sure that nobody gets hurt; that steam vapor is very hot and could burn you!!! also, these  stacks elevate the steam vapor above street level so that drivers can maintain visibility. so... if you see steam vapor coming out of a manhole that is not protected by such a chimney, you have to call the steam company immediately, there could be a leak.... (although usually its caused by water falling on a steam pipe).
hmmm... dont know if i feel safer, knowing all this.. :) certainly i will stay farther away from those pipes, from now on, i was not really aware of how hot that steam could be and saw them as mere photo opportunities...
(the crazy glow behind the steam chimney above comes from times square, which can be seen well ahead..)
Tweet
Pin It
Labels: new york, tim
Posted by CaT at 11:07 PM

Thanks for the information, I did see those pipes in NY indeed with a fire-engine next to it and all the steam coming out.I thought something was terrible wrong but now I now what was going on.

Well done CaT. Thanks for the link to Joe's NYC. I hadn't heard of his blog until now.

thanks!
i think i like to feed my own curiosity, and then lecture others about what ive learned.. ;)

and yes, wayne, i check that blog regularly, i like his pics a lot!