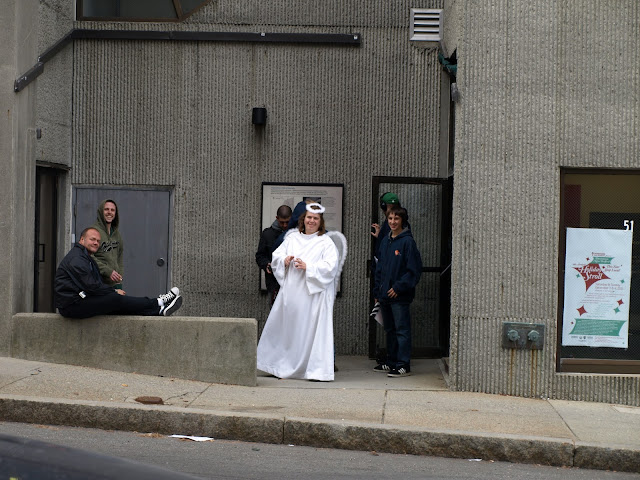 .....dont smoke. right, mom? but this angel was smoking....
i have no clue why there was an angel, i just saw him, took a pic, and at the same time a little girl came by and asked above question to her mom.
this was in new bedford, some 51 miles from boston, and its the whaling capital of the world! (or so it used to be). the streets have cobblestones and that makes for an uncomfortable walk. we went to the whaling museum (tim insisted), but i found it rather boring, although they did have one entire room devoted to whaling-memorabilia from the dutch! there was some delfts blauw and some paintings. the only thing i found impressive was the size of many of the whalers boats; some barely bigger than the whale... we also saw how you catch a whale, and all the tools, but i did not like that. beeehhh.
and then the next disappointment came when we got home.... we had this photo contest from our apartment complex; everyone could submit photos and the best would win a prize. and see! there was a little envelope under our door. so i thought; yeeeeyyy! finally! i won something!!! and then i opened it, and yes, it was second prize in the competition!! only, it was not for me, but for tim..... buhuhuhuhuhuhuhuh....
:)
Tweet
Pin It
Labels: driving around boston, frustration, photographing strangers
Posted by CaT at 11:18 PM

Ha, a bit of a mystery this I guess. But a very cool shot of the day it is!

Ha,ha,it is a weird photo, why would she wear such an angel dress? A bachelor party? Very funny. But when Tim wins second prize, you did win also a little? It is all in the family tough? Congrats for Tim and for you.