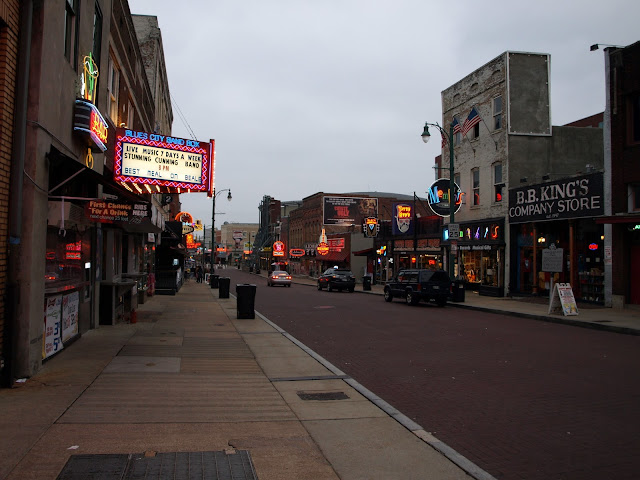 .... memphis!
above a picture of the most famous stret in memphis; beale street. this is where many black musicians performed in the 1860s, and where elvis presley later used to spend a lot of his time. today, it was pretty empty, but it showed that it now mostly is a tourist destination. i guess we were a little too early for the music to start and people to come, but we wanted to see it while it was still light out. it was sooo cold! that was a little unexpected but well...
we arrived in memphis this afternoon (after leaving our home around 4.30 this morning, beehhh! we had an extremely long wait (4 hrs!!)  in atlanta where we had to change flights since lovely priceline decided to change our original booking),  then we had a little debate which rental car to choose (i wanted bright red; better for pictures. tim wanted black. we went for the black as red cars are supposedly stopped more often by the police (source; big bang theory), and the tire profile was better according to tire expert tim, moreover the black car has massachusetts license plates; still i would have preffered red...), found our place for the coming 2 nights easily (here you can see pictures, its quite cool, with little notes everywhere and several music instruments you are allowed to use), and then drove and walked around memphis a little. its like in the movies!! my goodness, i wanted to picture it all! we were both sitting in the car mouths wide open. ooh, look here, look at that! there! but, it was rather grey out, so the pics did not turn out that well... maybe tomorrow! then we will visit the house of elvis, among other things....
now we are both exhausted, tim already fell asleep.
Tweet
Pin It
Labels: CaT, road trip, tim, tourists, while driving
Posted by CaT at 11:04 PM

Nice photo CaT.
Enjoy your trip, I am especially curious about Elvis' house. Have fun!

Oh, this is a great idea. I have been there too. To see all the famous places you ever heard of is so exciting. Graceland, I am curious what you think about it. I didn't regret visiting.

And a happy Christmas to you two in the South. Yes we were the pinguins, we saw them in the Garden centre and it looked so funny, we made a Christmas card of it.
Groetjes, Marianne en Stef

I hope the rest of your pictures turn out -- I'd love to see more of Memphis. This one looks good. I'll bet that the street gets busier later on, though it's hard to say what happens this time of the year. Say hello to Elvis for me.

thanks!
ah, and bieb: yes, i liked graceland. it was expensive and crowded, but we spent quite some time there and i know a lot more about elvis now! but i hope to post on it tomorrow or so...