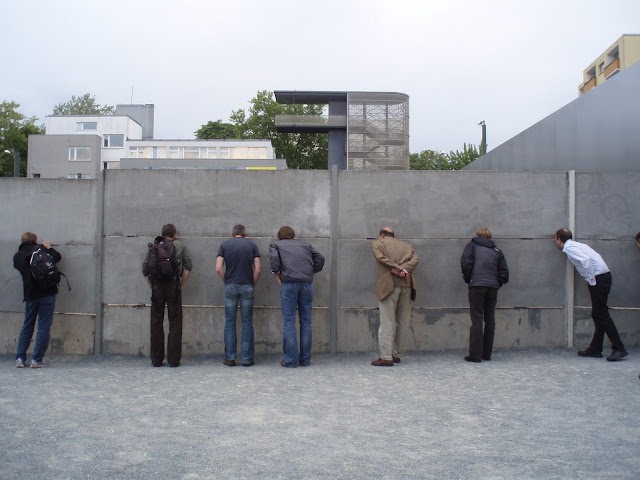 december already.... pfff. and that means theme day! this month's theme is "action shot". this is (yet another) old picture of mine that i took in 2009, in berlin. here you see a piece of the berlin wall that is still standing (i forgot where exactly this is). we were with a small group, just released from some scientific conference, free to explore the city. we were walking towards the wall, and i knew what all of them would be doing; looking through the cracks.... although we had just passed the other site by bus, and had more or less seen that there was nothing there, no action at all!! so i quickly got my camera ready for this action shot of no action... and yes indeed, they walked to the wall, to stare through the cracks... :)
i remember that during holidays, we once went to see the berlin wall when it was still functioning to separate east from west germany. i was less than 8 years old, and i still remember very well walking there. seeing those guards in towers, asking my parents if what they had just told me was really, really true; that you could not cross that barrier, because if you did, those guards might shoot you. i could not understand that it was possible to be just walking around, in the sun, while being so close to something so scary. not scary as in books or television, but something that was obviously real.
now that wall is demolished, although you can buy little (original or not..) pieces of it (people make money off anything!), and larger pieces are scattered over the world, here you can see a list of where they are. there is a piece in new york, at 53rd street, between madison and 5th avenue, with a nice little seating area around it (although it was 2004 when i saw it for the first and last time.. :) ), and wikipedia just tells me that there are at least 2 more in new york...
Click here to view thumbnails for all participants
Tweet
Pin It
Labels: new york, people photographing, posing for me
Posted by CaT at 3:59 PM

I heard about it when I was little too. Expected it to be something much grander - like the Great Wall Of China, or something. When I eventually saw pictures I couldn't believe that was all there was keeping people from freedom.

Great picture. Like it much and thank you for visiting my blog.

Ha,ha,very funny picture, must be very interesting what's behind.

:)
from this picture you might get the impression that science is an all-male profession..

I like the way you think! Great photo!
There aren't enough women in the sciences but our children will do better than we did.