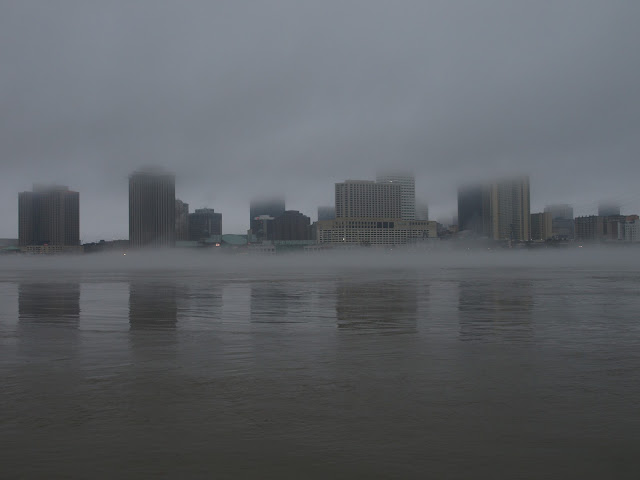 couldnt choose which picture to post! something from the colorful french quarter? the less touristy and less well off neighborhood around it? the sculpture garden? canal street? (i really liked that street) a cemetery? (they are really different from the ones i know) the mississippi river? with or without a boat? so... i choose the skyline of new orleans (NO) in louisiana (LA) as seen from algiers point. as you can see it was rather misty, and this lasted the entire day, so i dont really know what the skyline of NOLA looks like...
new orleans really feels different from memphis, and i liked it better. it was definitely more lively, and there was more to see. the houses more colorful and cute. and palm trees! those make a difference too, and i really think they can make any place look more friendly... the air felt much warmer here too, it really felt tropical and humid. unfortunately it was not the best day; it was raining on and off, and the entire day there was a dense fog. that made for some nice pictures though. this morning we were about to take the ferry to algiers point by foot, but just before departure they told us it would not be coming back until the fog was less dense... (you could really see nothing ahead of you). we thus went off again and instead drove around new orleans a bit, and finally drove to algiers point ourselves. that was much nicer as we explored the area a little more. then i snapped the above pic and we were just in time to take the ferry back, for 1 dollar (free when by foot). the mist above the mississippi river was so beautiful! and it was interesting that it got really cold when we went through it. a boat next to us completely disappeared and then appeared again... cool!
i think i will post more pictures later, on my flickr account. i guess when we are back, since now there is no time... :) but there is so much i would like to show!
Tweet
Pin It
Labels: crazy weather, on the water, road trip, skyline
Posted by CaT at 1:21 AM

A beautiful photo, so special with the fog and the reflections.

the fog was cool that day!