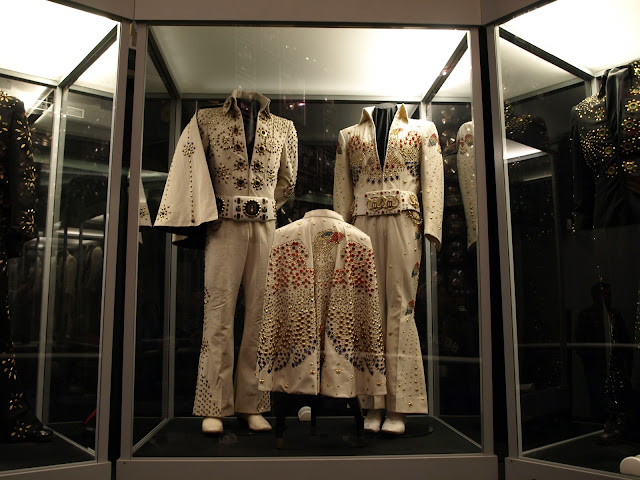 i think its fascinating how everyone in the world, or so it seems, knows elvis. i know who he was, that he was pretty, and the hair, sideburns and the dancing. and his final years in which he almost seemed like a caricature of himself, with even more hair and sideburns, and the weird tight jumpsuits. i knew it all (how? tv?), yet he was dead before i was even born...
so, yesterday we went to graceland. that wasnt cheap, 60 dollars entrance! (already an 8 dollar coupon subtracted) and 10 dollars for parking... but for that we spent 3 hours marveling at everything elvis. first parts of his house (which was completely over the top!), then more about his rise to fame, his grave, next to his parents behind his swimming pool, his cars (he had multiple, and had 1 painted in pink and 1 in purple!), how he was despised by the press very early on, and how his performances were not decent (how stupid am i, only then i understood why he was called elvis the pelvis!), many many pictures of him (my goodness was he goodlooking!), his planes (golden seatbelt buckles...). i learned so much more about him, and yet still know so little about his life! they focused on his stardom, and emphasized his cuteness, but barely anything was revealed about his private life (other than how generous he was and how he liked to play and had many motorized toys to drive around graceland, while nowadays its strictly forbidden to walk on the grass, haha). so... yesterday night i spent most of the time reading more about him on wikipedia... haha. also, i am curious now how elvis was perceived in europe. when did he become famous, did my parents like him, etc etc.... :)
after that we drove around memphis a little more and went to the motel where martin luther king was assassinated. its now a museum about civil rights, but unfortunately it was closed as it was christmas eve, im still really frustrated about that! (and spent quite some time reading about that event on... yes, wikpedia..) then we had a beer in beale street, accompanied by some life music. that was nice, but the street was still pretty much deserted (perhaps also because of christmas).
it seemed like 50% of the buildings in memphis are abandoned and collapsing or about to do so, that was a bit tragic to see.... also the area around graceland did not seem to be very good. the only amazing thing was that there, in the middle of nowhere, we went to an aldi supermarket and found stroopwafels!!! probably the most dutch cookie there is! that was a pleasant surprise.. :)
Tweet
Pin It
Labels: road trip
Posted by CaT at 12:04 AM

When I was 16, my brother had records of Elvis but I was not interested, I liked the Beatles more. But after seeing documentaries about him now, I am really going to like his music and his person. Graceland was not so weird as I had expected (except the Ape-room) It was a rather small house and a bit over the top but you got a good impression of the fifties lifestyle.
I think the press makes those artists weird, like Michael Jackson too because they are different.

I was a little girl when Elvis first performed nationally on the Ed Sullivan Show, a national variety show where everyone performed if they were good and wanted a big audience. We didn't realize it at the time but they only showed Elvis from the waist up because his moves were considered so scandalous. My grandmother loved him. He was cute but too old for me.

Hm... have to check the Aldi here for the stroopwafels!

kay, yes, they wrote about that in the museum, so funny! especially if you think what artists are "doing" nowadays...
and bieb; yes, we once again were happy to not being an artist... you will get rich, but eventually miserable and usually will die too early because of drugs and whatnot...
manon! and and and? did you find them?! they were cheap too! im still amazed they had them....