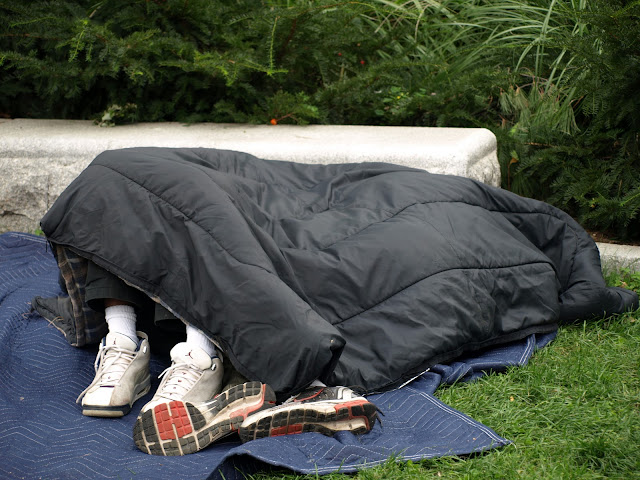 here some occupiers without a tent, sleeping next to the tent city in boston. today was another big day for them... some donators raised enough money to buy a tent that is more suitable for the coming weather than the normal tents that are there currently. however, the city of boston does not allow any "permanent structures" in the tent city (so also no portable toilets, for example), and if i understood  it correctly, they filed this winterized tent under permanent. now.. the occupiers knew that this tent would not be allowed in advance, yet they did let it come. it cost 1350 dollars. can you believe it?! 1350 dollars! wasted! i would have loved to have 1350 dollars.... many people would, but those occupiers decided to show off the "hyporcrisy of the police", not allowing them their tent. so..., they did not fight (how great of them), and they allowed the police to take the tent away, just 20 minutes after it arrived. this as opposed to a few days earlier, when someone donated a huge sink (to do dishes and stuff), that was taken away by the police as well. the videos of that event are rather sad, as you can see here, and 1 person got arrested. beeghhh. its so stupid!!! as do many people think, even those who did not think so earlier on. here you can read more... (and i guess tim can pick out my comment in the comment section.. ;) )
Tweet
Pin It
Labels: boston streets, photographing strangers
Posted by CaT at 11:26 PM

btw, this pic is from a few weeks back, and yes, that are 2 people, they woke up (or whatever) right after i took the pic..

It looks sad, but most of them are not homeless I think. In Amsterdam they had to leave yesterday, but they didn't. The mayor had a two hour talk with them and wants them to move to another part of the city. Don't know what is going to happen now.

they are not political enough! they are not getting much done this way, i think.. do they even know who to vote for? I think they should change the ammo.