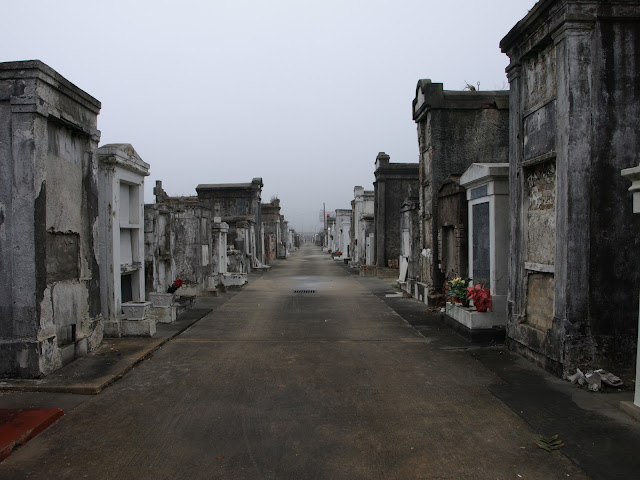 i like to visit cemeteries and have posted some pics here. now i know that this makes me a taphophile, and through biebkriebels i learned there are more grave addicts (oh how i like that word play), contributing to taphophile tragics initiated by julie.
this is in new orleans, on dec 26. we were driving on the highway directly above it, and i made tim get off it to visit this cemetery. we had no real clue where we were, except that it was close to the french quarter and the nearby neighborhood did not look that inviting (it was actually in the iberville housing projects). we just parked the car in front of the entrance and wandered around. there was nobody else, and the fog made it all a little more spooky. many graves were about to collapse and it did not seem to be too well maintained. through google maps i found where we exactly were; st. louis cemetery #2, consecrated in 1823 (there are 3, several blocks away from each other, #1 being the most visited; here you can view biebkriebels' pics of that one). and if i were to believe internet forums, we should be happy not having encountered any robbers or even murderers. you are strongly advised to ONLY go to these cemeteries through an organized tour (that will cost you some 20 dollars per person; getting robbed after all, only in a more sophisticated way...). commenters feed these beliefs by saying that because these graves are aboveground, bad people can hide behind them, and suddenly attack you. blablablabla. i did not feel unsafe. common sense, please....
anyways. it was flooded during katrina, but damage was minor. ever since this visit i have been fascinated by these aboveground structures and could not believe the explanation in my tourist guide; that this is because new orleans is below sea level, and flooding can make underground coffins float up, spreading corpses everywhere. some googling around told me that this happens sometimes, indeed. but, it is more likely because this was tradition in the native countries of the early settlers (i.e. spain and france). so why did they do it there? probably because of the rocky soil in southern europe; not easy to dig holes. i noticed that some of the graves looked like ovens (here you can see that in one of my flickrpics). the hot climate in NOLA does sort of turn the tomb into an oven; the high heat causes the body to decompose rapidly in a process that you could compare to a slow, natural cremation (it takes about a year, i read here. interestingly, until 1963 catholics were not allowed to be cremated, but such a natural cremation was ok). in this way, the next familymember can be buried in the same tomb, all they do is shove the remains of the previous one to the back, thereby saving a lot of space.
whoops... i wrote a bit too much, but i had so many questions and found so many elaborate stories on floating bodies which kind of annoyed me...
Tweet
Pin It
Labels: cemetery, common sense, road trip
Posted by CaT at 4:35 PM

This is a beautiful photo and all of the facts so interesting.

Firstly, CaT, the photograph is mesmerising! That fog is such a friend to your lens. We have many mausoleums (mausolea??) in Australia, but nowhere near as many as I have seen in France. But here, I have not seen them on BOTH sides of the access way, just on one side only. I could image the hairs on the back of my neck standing up as I became more and more surrounded by the resting places of the dead.

I like your line about 'grave robbers in a more sophisticated way'. We have tours of cemeteries here but I have not been on any yet. But they provide lots of information, rather than protection.

Thank you for your contribution to Taphophile Tragics. I am glad that Marianne influenced you.

Now I will go and look at your other images on Flickr.

I saw a coffin being inserted into a mausoleum today. (I would have taken pictures, but family and friends were standing around watching, so it seemed disrespectful.) I think sometimes it's economics to use a mausoleum -- you can fit more bodies into a vertical structure than if you bury them each individually. The cemetery I was at today had both in-the-ground graves, and a section of mausoleums which went quite high -- 6 or 7 coffin-high layers up.

So much information - I like to learn about these things to understand the whys and wherefores. Everything looks so huge in your photo.

Well, there you go.
This morning I was thinking "I wonder what happens to graves during a flood".
(It's the 1 yr anniversary of bad floods in the place where my family live - http://freefallingskyward.blogspot.com/2011/01/scary.html)
And you've just told me.
I'm glad I didn't google it myself!

That's a graveyard?? It looks like a streetscape - except for the spookiness of the fog!!

Wow, this one looks very different from the one I visited, it is quite spooky indeed. It is a pity that the tombs are falling apart and some look like ovens. Now you see where they lead the tourists, you found the real New Orleans, I think.

Very nice picture, eerily similar to one I made in January of 1999 at nearby St. Louis No. 1. Fog is your friend.

St Louis No. 1 is also the home, so to speak, of Marie Laveau, the voodoo queen whose tomb, interestingly, stands next to the one of Ernest Morial, the first black mayor of New Orleans.

I have never see a place like this. The fog was a bonus.

It sure looks spooky. It looks like you are walking through a city of the dead. The graves are huge and a bit neglected although I can see one that has flowers and looks well kept. Floating corpses....oooooh that sounds gross.

I have not visited your blog for a while, so tonight I caught up with the last week or so. It continues to be interesting, but I can't comment on each. This one really caught my attention. So, why is everyone posting cemetery photos? BTW, you should go to Mt. Auburn Cemetery in Cambridge, on the way to Watertown, for the best cemetery in greater Boston.

thanks all! i really enjoy this taphophile thing, although i still have to think about the spelling every time i type it.. :)

@jack; its for taphophile tuesday, started by julie! you can find a link to her blog at the beginning of this post.
i have been to mount auburn several times now; and indeed; it is beautiful!! i heard about it only after living here already for a year.. but i will make up for that.. :)