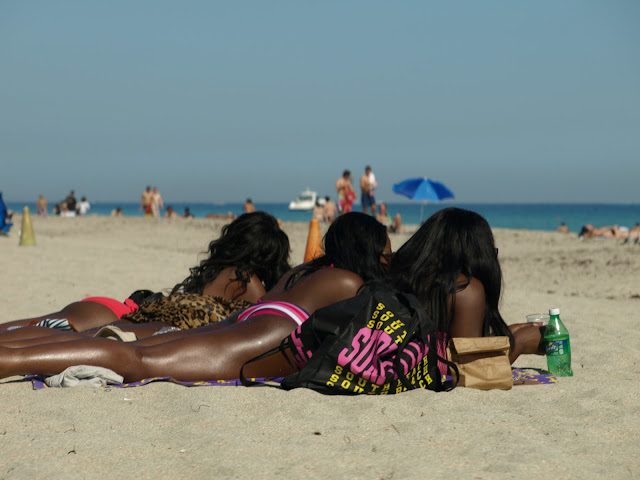 the last day of 2012 2011 (!!) we went to miami beach and swam in the ocean! it was so pretty and blue, and very sunny and warm... i never swam in the ocean in december!! i also never swam in the ocean in/around boston, not even in summer as the water does not look as attractive as it did here... (actually it looks rather dirty).
these 3 pretty ladies were lying close to us, and i could not resist taking a picture... :) after that we walked around on ocean drive lined with art deco houses/hotels/clubs, it looked fancy and pretty. it was so crowded! (and many, many german people, i noticed). in the evening we dressed up and went by publi transport back to the city, for new year's eve. public transport in downtown miami is free! it was called the "metromover" and was without an operator, so you could sit in the front and have an amazing view of miami (too bad we didnt do it during the day). we were stupid to arrive too early, at 8 we were downtown... we walked around a bit and saw the urban jungle. it was as interesting as the tour through the everglades, with all the dressed up people, and the women with impossibly high heels (i noticed that women are much more dressed up here anyways than in boston. in boston it seems everyone goes in pyjamas to the mall, here they walked around in stiletto-heels and short skirts). it was great people watching, but around 10 we had enough... and... boring as we are... we just went back to the hotel... and had champagne in the jacuzzi.. which proved to be difficult too; it was far too hot to sit in that thing until midnight!! hahaha. we missed all the fireworks in miami, but thats ok with me..
Tweet
Pin It
Labels: road trip
Posted by CaT at 11:17 AM

Boston was voted the worst dressed city in 2011...

We have people here who jumped in the waters of the Strait of Juan de Fuca (which leads west to the Pacific Ocean) on New Year's Day. The water was about 40 degrees F. In some areas the winds took the outdoor air into the 20s. How nice to enjoy clean, tropical waters!

i will happily go to miami again next year! :) altough the countdown - ball thingy downtown was a bit dissapointing. so it's ok i think that we went back..

@julie; yes, so i read... and although i dont like the pyjamas in the mall, the stiletto-heels were ridiculous too... :)
@mriekje; happy new year to you too... it just seems we were on holiday for sooo long... could well have been a year. although then it abruptly ended again.. :(
@steffe; hahaha.... exactly!
@kay; ah yes, thats what the dutch people do too, in the north sea. i think there it was a little less cold, but still not very pleasant. i liked our new year's dive so much better!!

A bit late, but time flies. That is quite a beachphoto, wow very well.