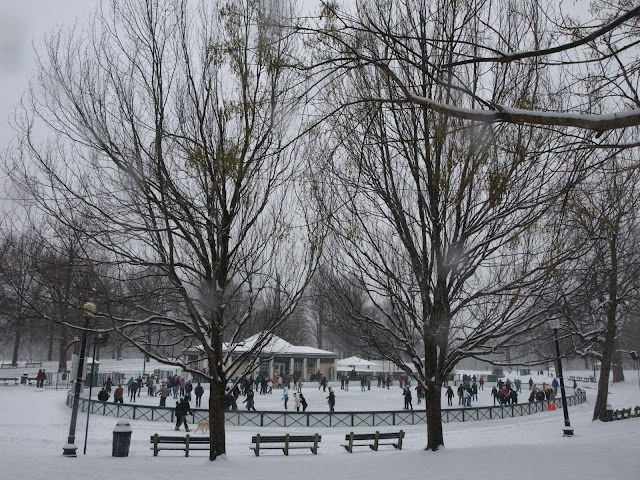 yayyy! finally the first real snow of this season..... when going to bed last night it was not yet snowing, which was very disappointing to me. naturally, i woke up several times during the night and had to check the snow... and jeejjj, at some point it was snowing. it wasnt such a spectacular snowstorm as we had last year (we even had several), with strong winds and big flakes... these were tiny flakes... but they were coming down steadily for hours, so we woke up to a nice layer (again, not the knee-deep we had during our first US-snow last year).
we walked a bit around boston this afternoon, above the boston common with the skating rink at the frog pond, such a different view than in the midst of summer (taken form the other side)! unfortunately, some snow drops on my lens... we walked around a bit, and i took some pics from higher up, where young and old were sleighing down. suddenly, a man standing next to us bellowed; "you are not taking pics of my kids, now are you?!" me, surprised and not yet knowing what to say, could only think of this event. then he said: "because if you do, i have to sign a release form". i just mumbled something like "eehmm.. i was just taking a pic of the entire view from here.. ok" but then he said: "i was just joking!! its one of those things i like to say, there are so many photography students around here". pfew...
most of my pics were disappointing.. but i guess over the coming days i will show you more of them anyways.. :) im not sure how long the snow will last, forecast says higher temperatures in a day or so.
Tweet
Pin It
Labels: boston common, boston sightseeing, photographing strangers, snow
Posted by CaT at 12:11 AM

Enjoy the snow. . .the rain washed most of ours away last night and today, though a few miles away from us there's still plenty. I'm learning that over in the area around Seattle there are people who've been without power for days due to ice and wind. One friend just told me they were down for 43 hours. Ugh!

Oh, I am jealous, I want some too. We have 6C and rain today, it is depressing weather. What a relief the man was joking, it almost started all over again with the children pictures.

LMAO, Bostonians and their sense of humor ;)

My thoughts too, Bostonians have a unique sense of humour. :-)

i gave the guy a card for this blog-- let's see if he comments :)