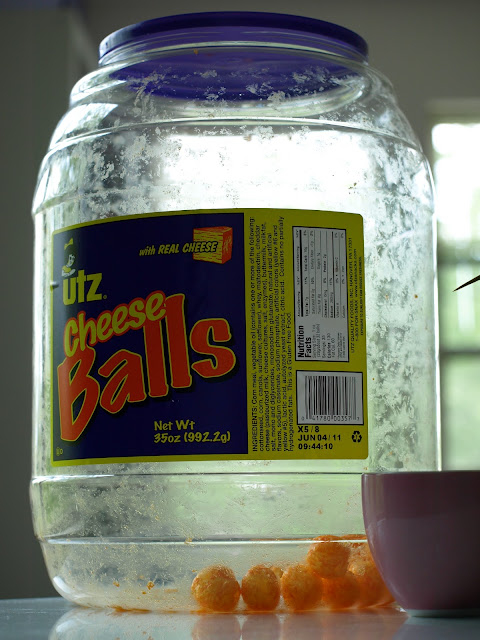 im not very inspired today... so here, some cheese balls...
theres no snow at all. its rather warm (certainly for this time of the year), and i wonder if we ever will get more snow! last year we were immersed in it, the streets were getting narrower and narrower from all the snow piling up on both sides. and now?! nothing... :( i could as well be in the netherlands. although... there its pretty cold now, with temperatures well below 0 (celsius).
believe it or not, but the primary reason i bought this enormous thing (what is it? a box? a can?) was because i thought it would look funny at home. placed atop the bookshelf, its size looked really disproportionate. but, of course... after several weeks, i had to try one. and then a few more. and they were not that good, but they were there, and there were a lot of them. and then.... about halfway or so, they got stale. yuk... not surprising, if you think of it, such a huge box filled with air, and cheese balls. that will make them go stale. is that why there are so many overweight people in this country? because everything is in such enormous packages.. and you do need to eat it, before it goes bad, otherwise its a waste!
i actually trashed them, they were really not good anymore, but then i realized i wanted to take a picture. for comparison, i put my favorite pink illy-cappuccino cup next to it (which i brought with me from the netherlands, i couldnt leave them behind). just the other day tim and me were thinking how it would be for a real american, one that has never been outside the us, perhaps outside his state, to go to the netherlands. he would find everything small. the houses, the cars. the portions in restaurants and the milk cartons in the supermarket (maximum one liter). the fridge would be tiny too, but that would turn out fine, as most products are sold in at least half the size as they are sold here. but you cannot keep everything for weeks in it, it will go bad, as high-fructose corn syrup is used in much less abundance....(gelukkig!)
woops, i wrote a lot. and that for a picture of cheese balls... :)
Tweet
Pin It
Labels: food, home, real americans, the netherlands, things i miss
Posted by CaT at 11:26 PM

Very funny, the photo and your thoughts about an American going to the Netherlands :-).

But inspite the small portions, obese is increasing here, specialy with children. But the reason is not the amount of food but the quality and the lack of movements. Well I know the feeling of taking a few cheeseballs and then..... The only way is not to buy it, but then I take a piece of cheese, which is not always better. Grrrr.

I live near the dutch border and it is very cold here -12°C. For me to cold. the cheese balls looks very tasty.
have a good weekend

grease balls. i mean cheese balls. isn't it ironic how they write "made with real cheese" on the box. like that's not what you were expecting from cheese balls, something with actual cheese in it. oh no, as an added bonus just for you, which will make the distinction with all other cheese balls; we will add REAL cheese. and by real cheese, we of course mean enriched, corn syrup enhanced, mechanically molten and blended, calorie rich plastic tasting yellow goo. because that's the kind of great American company we are.

European stuff is in smaller sizes because it's not inflated with all the stuff Tim mentions above. People eat things that are fresh and not expected to last weeks, so they buy less of it. And the scale of things is much more human - you don't feel overwhelmed by "more metal" monster cars or ego-enriched buildings. And quality still counts for something. The US isn't completely fat and junky, but quality takes time and money that a lot of people just don't have.