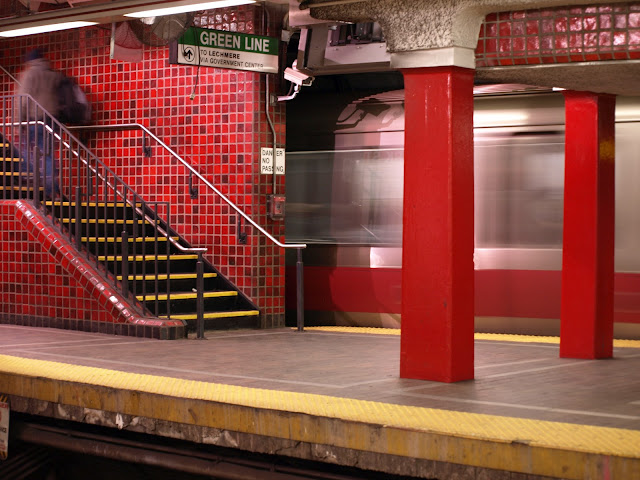 last week or so we were sitting at park street, waiting for the train to come, the train in the other direction was just leaving (im thinking really hard where we went or came from, i cant remember, and i think its odd we were waiting for a red line, but we clearly were, as you can see...; our home is on the orange line). in weekends and evenings trains come less frequent, and its not that crowded, so i felt more free to take some pics.
when we were in boston for the very first time, we rented an apartment close to the park street stop. it took a while to figure out this station (in fact we didnt manage to figure it out during that week). you can walk to the orange line, the red line, and upstairs you can catch the green line. but it was not clear to me, at all, how to get from one platform to the other. especially when arriving on the green line "outbound"... complete desorientation. "i see the platform i want to go to now, but HOW do i get there?!" to complicate matters even further, there are 4 different green lines "inbound", and i had no clue how people knew which green line goes where (then i found out they have letters, B, C, D, and E, and there are 2 platforms, B & C stop on one side, behind each other, D & E on the other. but this took me months!!). the designation "inbound"& "outbound" was weird to me too at first, they sort of randomly choose the center of the city, and depending on that, directions are given as in- or outbound (sort of like up- or downtown, i guess, only boston is just so tiny!)
hmmm, i guess this is boring, if you have never been to park street in boston. if you ever go; remember that you are allowed to cross the tracks of the green line at park street. you dont have to wait until a train arrives, going in on one side, and leaving on the other..... :) (when someone told me that, i was just glad not being the only one who thinks this station is very complicated...).
Tweet
Pin It
Labels: green line, MBTA, orange line, photographing strangers, red line
Posted by CaT at 12:14 AM

Have you ever negotiated Saint Lazare metro in Paris in peak hour?

Nice photo! It sounds very complicated, I think it is invented by men and a men thing. I always walk behind my husband because he understands such routes immediatly and is watching maps. A friend of my went with her grandson of 15 to London and he understood the underground in a minute to her relieve. In Amsterdam I still have to look in the underground which way to chose, even there are only two...

I've changed at Park Street and yes, the Green Line is very odd.

The shot turned out well.