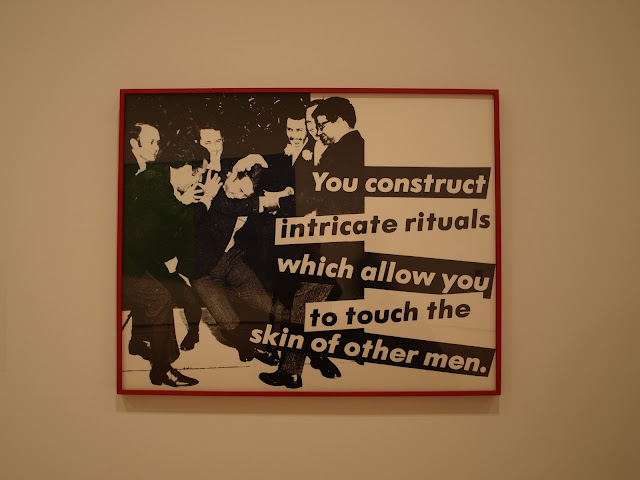 this is a piece of art by barbara kruger, which i photographed in the museum of art yesterday (on my screen the colors looked very crisp. on my screen, not so much... :( ). we have an entire book with her photo/phrases, which are really interesting. she takes her pictures from different media sources, and puts a phrase/question next to it. often, they really make you think. for example; "when i hear the word culture i take out my checkbook" "your moments of joy have the precision of military strategy", "i shope, therefore i am", are a few of them. the pictures are important too, ofcourse... (so you should really look her up!).
anyways... i realized the one above perfectly describes what i have been watching tonight; the super bowl, the annual championship of the highest level of professional american football. it was the new york giants against the new england patriots. until last week i didnt even know what the super bowl was, or that the patriots were in, or.. whatever. but i watched the entire thing. plus 4 times as much of commercials. my goodness... our host this evening told us that for every minute of playing time, there are approximately 4 minutes of commercials. i know now that guys in tight pants have to get a weird-shaped ball to one side of the field, and during this process they are most of the time lying on top of each other. i also noticed they have a towel hanging from their pants, and some have black stripes under their eyes (to prevent reflection or whatever.... well.. the sun still bothers me sometimes, even though i wear a lot of black eye-make-up too! but... i dont usually wear a helmet, perhaps it has something to do with that). more importantly, some players are really really fat, and i could sometimes see their bellies (yuck), and.. the while the patriots had shiny tight pants, the giants had matte pants, and i now know that shiny pants make your ass look more tight. (of course, this has not been scientifically tested. it could be that the patriot's pants were more tight, or their asses better trained...).
from the numerous commercials i learned that women are objects. i saw many very pretty, barely dressed ladies recommending some product or another... (another image/text of barbara kruger would have been highly welcome).
all in all, it was interesting, and i saw a little more of american culture...
Tweet
Pin It
Labels: art, real americans, weird sign
Posted by CaT at 11:47 PM

You paid waaaay more attention to everyting on the field than i did, but thanks for sharing, now I know everything I always wanted to know about the black stripes, tight pants etc, hahaha.

I do like you photo a lot, I will definitely look Barbara Kruger up!

hahaha.....love this description of super bowl

Ha,ha,ha, very funny story from a different point of view about the bowl. I think I would watch it the same way. It surprises me that even sportsmen are fat overthere. At least they have to do exercises I think? The photo's of the artist are very interesting, I like her way of expressing.

You totally nailed American Football from a (European) woman's perspective :D The Giants' looked a bit bland, loved the shiny tight pants the Patriots wore!
The really big guys are playing in the defense team. They don't need to be fast, they 'just' need to be in the way. Imagine running with the ball and then bump into such a big player... And you're on the ground still holding that ball and all those big guys start to pile up on you so you really really don't escape. Ouch...

By the way, I'll bet the big guys from the defensive teams even will outrun us all ;)

LOL!! The artwork is perfect for your commentary. I don't "get" football any better than you. . .at least you took the time to observe and report. Maybe the shiny pants make the players more slippery when the other guys grab at them.

My husband saw a comment in the paper about the Patriots and immediately thought it was something political. I had to explain to him that it was Super Bowl and who was playing. Not everyone's lives revolves around football. . .

Well, i think American Football is a really cool sport, because there are so many tactics and rules involved, it's incredibly difficult to play it well, and it really is much more complicated than for instance soccer. I think that's why some people don't like it: it's not easy to understand the game if you don't know what's going on, and then it just becomes a pile up of big guys.

And FYI: the 'big players' are on both offense and defense.

last year we managed btw to completely miss the super bowl, at least me, i had no clue that this was so important for many americans. i guess its also because we dont have a tv...

ah, thats an interesting explanation re the shiny pants, haha!

and yep, we were also wondering; where is the bowl?!!

Your post is outstanding as an outsider's veiw of American football. Love it! (And much better than my post-Super Bowl post. I was expecting a Patriots win and had to come up fast with a "loss" post.

Barbara Kruger lives near me in a modernist Nuetra home. Soooo jealous. Those pithy statements put her there. Of the photo text school I like Jenny Holzer best.

As to the bowl, I skipped the boys but hung around for Madonna