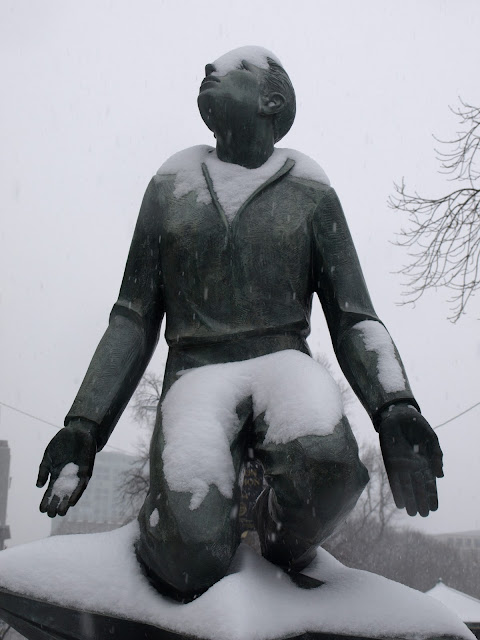 ...snow?! i liked this statue during the one real snow "storm" we had this year. it is in the boston common, and i dont know why its there or who made it... in fact, i had never seen it before, the snow made me suddenly see it... :)
today we had a little snow, tiny flakes. but it was not cold enough for them to stay on the ground. buuuhhh. but... for the economy no snow is good. at least, thats what i read in time magazine. there is more work for construction workers, more gets done, people buy more, and the city does not have to spend millions on snow removal (last year's budget for snow removal was 16 million dollars, in boston!! and they spent it all, maybe even more...) and roads get less damaged (although the roads around here are so awful already, i cannot imagine they can get even worse...).
Tweet
Pin It
Labels: boston common, boston sightseeing, crazy weather, frustration, snow
Posted by CaT at 12:35 AM

That is a funny sculpture with a striking text. It is weird indeed that all the winter stuff is going on in Europe and not where it used to be. Maybe in springtime? We had one snowstorm, but the snow is still there because of the cold it won't disappear. But the roads are cleared once and are still clean.

Very nice photo CaT, can understand why you suddenly did see it :-). And is it a b&w photo, or was it just that grey outside when you made the pic?

cat never photoshops.. but she does shop.

It looks like an interesting sculpture, though it looks really uncomfortable to have snow in her ears and down the front of her face. But maybe that's why she's gesturing like that. "What's with having to stay out in this weather?!"

Yep nice photo and great statue.
When you go back write down the inscription and surely it says on it who made it?
please?