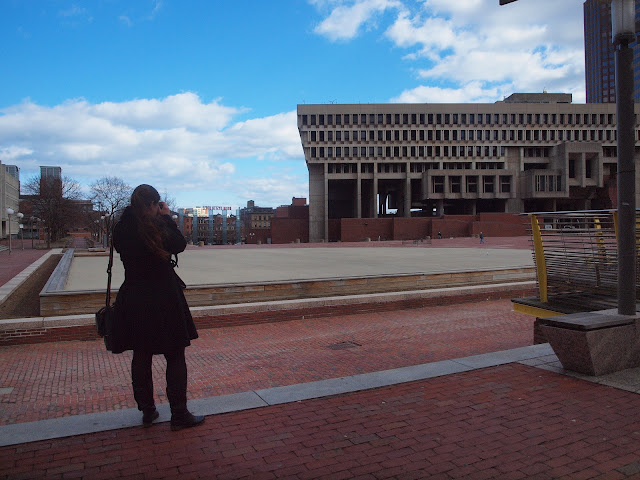 here im standing in the brick desert, or officially known as city hall plaza. in the back you see the city hall of boston. i didnt know the surrounding plaza was nicknamed brick desert, but its a very apt term... and im a little sad i never came up with that myself! i was trying to picture the ugly city hall, but in my pic the clouds were all wrong, so im taking tims... with me in it. apparently this building is built in the brutalist style. i would just call it ugly (and a little scary)... its massive, grey, overwhelming, and reminds me of some communist-style building in eastern europe. it was one of the first things we saw the very first time we were in boston. a saturday morning, rainy and cold, no people on the street... that certainly left us wondering where that great, lovely, amazing boston city was where so many people had told us about.
this is one of these pics that i see and think; oh, is that really me? i didnt know i looked like that! (i dont know whether im just weird or other people somtimes think that of themselves as well?) and ow, is my hair really that extremely, ridiculously long? i have never been to a hairdresser since im here... tim has cut it a few times, but the last time was really quite a while ago...
Tweet
Pin It
Labels: boston sightseeing, boston streets, CaT
Posted by CaT at 12:11 AM

Nice shot of this desert. The building also reminds me a bit of Chandigarh a town in India build by le Corbusier in 1953 as capital of punjab because the old capital Lahore was now part of Pakistan.

When my son was about 10 he was reading a 'Where's Wally' book and I walked in and there he was tearing the pages. I asked him why and he simply said 'I can't stop'. I wonder if the 'brick-desert' brick-layer was having a 'where's-wally' moment.

I cut my own hair. The hairdresser wants to cut it all off - evenly. And I just want a bit here and a bit there. I cut it every Sunday morning after my shower, and that way it NEVER looks bedraggled.

I agree with your opinion, it looks like an east-European communist building. I don't like the concrete, I once lived in the Bijlmer between all concrete apartment complexes, very depressing. Don't worry about a hairdresser, they always cut it the wrong way and want to sell you all kind of creams.

Yes, this is really some ugly building, If I ever go visit Boston, I know I can skip City Hall and its brick desert.

I also never went to a hairdresser since I came to NY. I am always a little afraid I wil mess up when it comes to handing out the tip money to everyone who has helped you. (how does that work, how do you know how much you have to give??) :-)

I've seen lists of the '10 ugliest buildings', '20 ugliest' etc. This building is on those lists.

Ugh! "Brutalist" is right! And so is "brick desert." I think there was a period when architects forgot that buildings were about people and that we have to live and work in them. It was all about building some ego monuments.

and you know what, this is not the only building in this style. theres another one that i still havent managed to get pictured in a way that you can see its ugliness.. :) but i keep trying!

It is quite ugly, I agree with you. And also I see the resemblance with Hatshepsut's mortuary temple, but it is only a fleeting resemblance. The Egyptian building is wonderful once you get close to it.