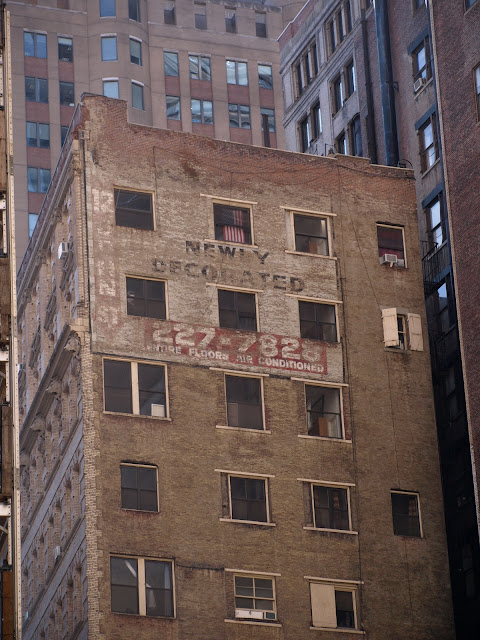 i took this pic in new york, when we were there in october. i guess once this building was newly decorated indeed, but now its merely a ghost sign... it was around the time we had to decide if we would renew our lease at our current apartment complex or not. it was expiring at the end of december, so we had to decide 2 months in advance whether to stay or not. as opposed to the netherlands, here you have to rent an apartment by the year or more (you can rent it with a "flexible lease" but then the rent is even higher than it already is...). so.. once you decide, youre stuck for at least another year. the other great thing is that other apartment complexes do not know 2 months in advance whether they will have something available for you or not. so its kind of a gamble; you terminate your lease, yet are not entirely sure whether the new place will have something available (ofcourse, you can always pay double rent for a few months! they do know whats available right NOW!). we did look for some new apartments, but they were all more expensive (and ours is already too expensive)/were less nice & expensive/ not close to a subway station. the worst experience we had at a similar complex as ours. we had an appointment at 10 in the morning. it was cold and windy, and there was nobody. we had to wait outside as we could not enter the complex. when the "leasing officer" showed up nearly 10 minutes late, she said "well yes, it was 10-ish". no apology, nothing. then we were in her office, she had only introduced herself to tim, and then.. while i was next to him ALL the time, she asked him, and only him: "so... what are you looking for? is it for one person?" i was so surprised i did not say anything..... it was one of those moments where you really should have said something, but just nothing came out. grrrrr...
ah well, in the end we decided to stay where we are. boston is only the third most expensive city to rent an apartment (after new york and san francisco), with rents of 1- and 2-bedroom apartments being 51% higher than the national average in 2011. (1-bedroom being $1665 dollars on average, in boston. i can only say we pay more... and we dont even live in boston, but another small town!! beeegh. it does hurt..). 3-bedroom apartments are even 70% higher than the national average!
Tweet
Pin It
Labels: graffiti, new york, oak grove village, weird sign
Posted by CaT at 12:22 AM

I like your photo, strange that some textes will last for ever on a facade. They must have had very good mural paint in those times. The housing business sounds rather complicated overthere. Must be difficult to effort the rent when you are single, but with two it is also very much.

It reminds my a bit of a wegee photo from 1945. A burning building like on your photo with the text instant soup just add boiling water. So does the fire department on that moment.

I'm shocked by those rents. Vancouver is an extremely expensive city but I'm not sure prices are as bad as Boston.

I lived in San Francisco for many years and rents only got worse as time went by. I had a small garden apt. in a great neighborhood, a wonderful landlady, and it was affordable. I stayed there a long time.

Is that $1665 a month Cat? Gosh how rude was that 'leasing lady', I hope you gave her a disdainful look as you left! I guess one good thing, you won't have all the upheaval of moving. Great find with the ghost sign.

Yes, 1665 a month! i thought rents would be cheaper than the crazy amounts i was paying in the netherlands, but... not so much.. :(

and sc; i have to look up that photo. i like weegee a lot!