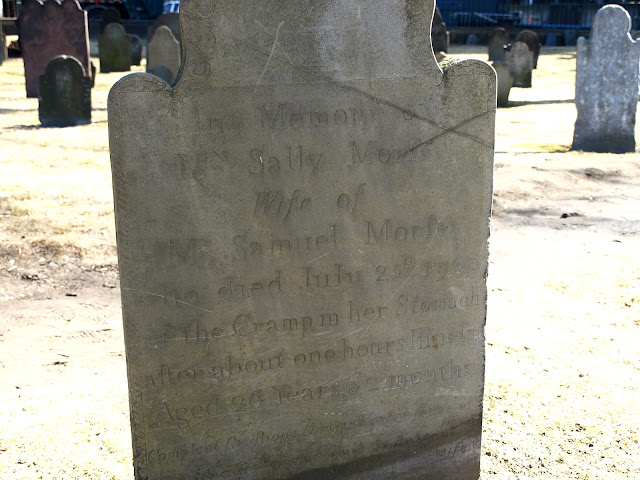 another cemetery in the center of boston, that is relatively close to the ones i showed you last week. this one is in the boston common, a large park in boston of which i already posted many pics on this blog. yet it was only this february that we "discovered" this park has a cemetery (next to the tennis court, baseball field and bandstand). we were waiting for someone to join us for the cinema but were too early and decided to have a small walk on the side of the park we dont see that often. and there it was! a cemetery; the central burying ground! it was locked... but a few weeks later we were there during the day and it was open. as opposed to the other cemeteries, this one does not seem to be much visited. its more than 100 years younger, established in 1756, but the stones looked more or less the same and equally old.
the above stone was found by tim. and since then i think about it every now and then. although you can read it, you can do so only barely, so it was more or less by chance that he found this one. this is what we read: "in memory of mrs sally morfe, wife of mr samuel morfe who died july 25th 1799 of the cramp in her stomach after about one hour illness aged 26 years & 2 months". i just asked tim what could have caused her sudden death (he is the medical doctor, not me), but his list of probable causes was pretty long... and i have to say i forgot which one he thought was most likely (it is late and, as usual, he went to bed already). but poor sally, only 26....
then.... not very well visible on my picture, but underneath all this, in smaller, italic script it says: "complete (? about that word im not sure) she shone through every scene of life, the tender parent and indulgent wife"
i think that is very sweet. especially in 1799.
for more taphophilia, go here.
Tweet
Pin It
Labels: boston common, cemetery, weird sign
Posted by CaT at 11:54 PM

Totally agree, that is very sweet.
And how great that you discovered this while on a unexpected walk.

Poor Sally. To die so young and from somthing that was probably relatively minor by today's standards. Thanks for sharing.

What a fascinating find! I am not a doctor, but a burst appendix can be painful and was once life threatening! I was rushed to hospital as a child with severe pain and the doctor feared my appendix may burst. I wonder if that could be the reason. And the small font word could be "compleat" meaning "all round" but the word is usually used as an adjective e.g. "compleat guide". Just a thought anyways.

Didn't know either there was a cemetery in the Commons. What a wonderful find. It's hard not to dwell on Sally, having being struck down in the prime of her youth.

What a tragic death of such a young woman. She was very loved and missed by her family and that is always good to read.

What a shock that must have been, to lose your wife within one hour. No time for a doctor to get to her, even if he could have done anything.

Golly, Tim is the medical doctor for sure!!~

I think perhaps that their surname was 'Morse' as the letter 's' was often written like an 'f' in the olden days.

And also, what is so very different about this headstone is the level of detail about her final illness. Unless they died by an accident in the wider world, one usually does not find any hint of medical issues. For which I guess I am strangely grateful.

Thanks for this one, CaT. I love your text which so mirrors the quirky grave photographs that you come up with each week.

@gemma; yes, it seems to be compleat, just didnt know what it means.. :)
the onl thing i could find about sally was her death mentioned in some newspaper 100 years later. they just mentioned that that was now 100 years later and they had the text from her stone (minus the compleat).

@julie; yes, you are probably right! totally forgot that! morse sounds much better too... :D

It's fun to come a little later to the party to read a post and then everyone's comments. Like Julie, I thought the graphic description of her untimely death was unusual. Nice you found this cemetery. Some of life's suprises are welcome. Others, like the one that struck poor Sally, not so much.

An indulgent wife today is more likely to be read as self-indulgent, like big spender.

Can you imagine if all the graves described the cause of death what a odd collection that would be.