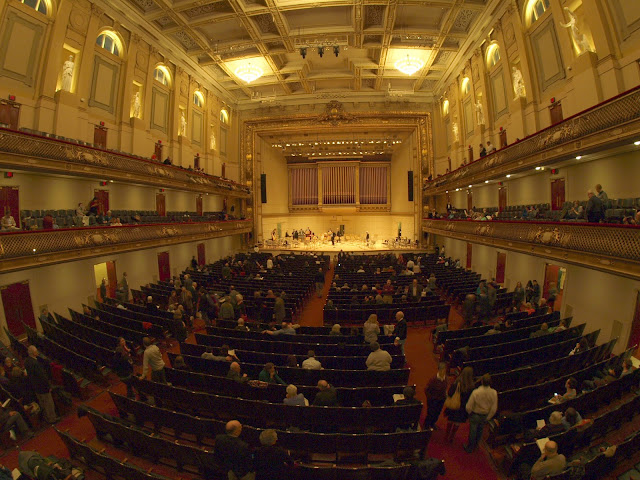 last week i got a nice surprise! someone had 1 extra ticket for a concert in the symphony hall. since tim was (and is) still in the netherlands, the decision was easy... :) i was not dressed for the occassion so i rushed home only to change and run out the door again. in cold, rainy weather... (right now its finally really nice weather!!). it was not supercrowded, and bag check (which they always do) was done with much more scrutiny than before; they looked at every item in my bag.
me and tim had been to concerts a few times before, but we never sat on the balcony like i did this time, front row, and almost entirely in the center! its pretty, but i do have to say that i like the amsterdam concert hall better. the stage is also much bigger (first time here i was surprised by how tiny it was). i continue to be amazed by people who just walk during the concert, or get up as soon as a piece has ended. can nobody ever wait till the break??!! i feel this is something you dont see in the netherlands. for one because its weird, and 2 because its a waste of money to miss a part of the concert... ;) (the same happens in cinemas, people constantly get up and walk during the movie. its a bit distracting sometimes and even after 3 years i think its very weird behavior).
anyways... the boston symphony has a nice program, called 20under40, meaning that if you are under 40, you can go to many of the concerts for only 20 dollars (i think it is an anonymous donor who pays the difference)! that makes an evening at the symphony not that crazily more expensive than a ticket for the movies. still... its mostly old(er) people at the symphony... :)
Tweet
Pin It
Labels: boston sightseeing, concert
Posted by CaT at 11:20 PM

Smaller venues like this can offer really wonderful performances, much more intimate than some huge auditoriums.

I haven't been in Symphony Hall in many, many years. It used to have outstanding acoustics. This program to make it easier for younger people to attend is really good. In the USA, audiences for classical music are nearly all old folks.

The stage is really small indeed and that walking of the public is strange and rude, no respect for the performers.