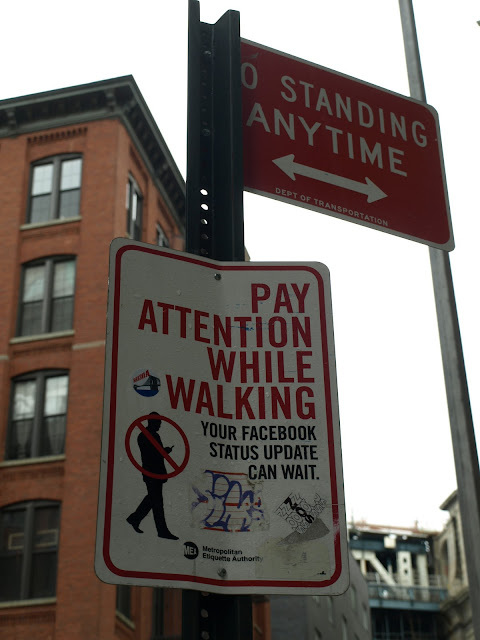 good news: we sold the table today!!! jaaajjj!! maybe selling from craigslist is easier if you put a phone number there (before we didnt); today several people called. or maybe it was the lower price... :) it was actually quite low, including the 4 red chairs. but.... the guy coming to pick it up told us he had just lost his entire household in a fire..... he asked whether we had more stuff, but more or less everything is gone now. except the couch and the bed.... but the bed we will have to trash (we got it for free and it is really broken in several places), and the couch we will probably then bring to goodwill this weekend.
anyways, i didnt want to write about that! look at this traffic sign!! had never seen it before, but this we saw in brooklyn, NY, this weekend. and they are right. its so often that people are in my way, walking slowly, because they are busy looking at their screens, while walking. if you look around you in the subway, most people are on their phones doing some kind of game, texting, or facebook indeed... i always wanted to take a picture of that, but never dared. nobody seems to read anymore, these days!  i dont have a fancy phone, and dont have the urge to check it every 5 seconds... same when in the cinema, many people check their phones during the movie (very annoying!!), and almost everyone gets out their phones as soon as the movie is done. no talking with your friends that are actually there how the movie was... no, checking the phone whether friends not present have to say anything.... grrrrr.... am i getting old...?
Tweet
Pin It
Labels: new york, weird sign
Posted by CaT at 11:47 PM

I'm glad the table went to someone who will appreciate it!

I've yet to overhear a cell phone conversation worth listening to. I know I'm old. I just don't get it.

The sign would be useful if they would stop texting and look up:-)

This is so right and true. Everybody walks around with his head down. People don't look at each other anymore. The sign is very funny, but I agree with Andy, would anybody notice it. Maybe they better can paint it on the pavement!