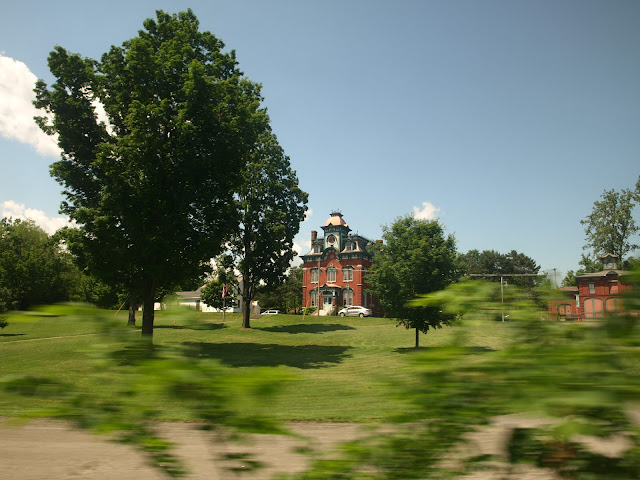 so actually me and my sister spend a day in new york (with some rain, beeeehhh!), and then from new york we took the train to montreal, canada. we were told to be at the train station between 7 and 7.15 for a train leaving at 8.15. well that was a waste of time... a lady checked we had the required documentation and so at 7.01 we were told to be back at 8. but at 8.15 we were in a fancy amtrak train with lots and lots of legspace and fancy chairs (those where you even have a "leg piece" that you can move up an down. sort of like a dentist chair).
and then we were off for a 10 hour train ride. that is quite long!! luckily i really enjoyed the views and every now and then even i fell asleep. we mostly rode along the hudson, and passed through teeny tiny towns with tiny "stations", some with cute yellow stepstools to get in and out of the train. amtrak says on their website its on of the top 10 most scenic train rides in the world (because being one of the best/beautiful/fastest etc in something is always important to americans... ;) ). but i was too lazy to take pictures and the ones i took were not the best... i just was enjoying the view and didnt actually want to do anything.
at the border with canada we stood still for an hour or 2. that was quite boring, especially as we were not allowed to "move" (i.e. getting up). everyone was questioned. and one person was not allowed into canada. the guy was sent back after having just spent some 8 hours in a train....
Tweet
Pin It
Posted by CaT at 10:44 PM

That sounds like a great trip if you don't count the waiting.

I think you can be forgiven for enjoying the view without bothering taking pictures. ;)

This is some house!

I remember we took the train from Washington to NY. I was keen to make a photo of a real silver american amtrack train. But we were not allowed to enter the platform and had to wait behind doors. When it finally arrived the doors opened at the last moment and we had to run with our luggage along the train to find our places and were hurry, hurried by the guards to go faster. When we got in it started to leave at once. Pffff what a way to start your travel. Have never been able to make a picture! And of course that stupid check of your luggage again, for a train of all places.