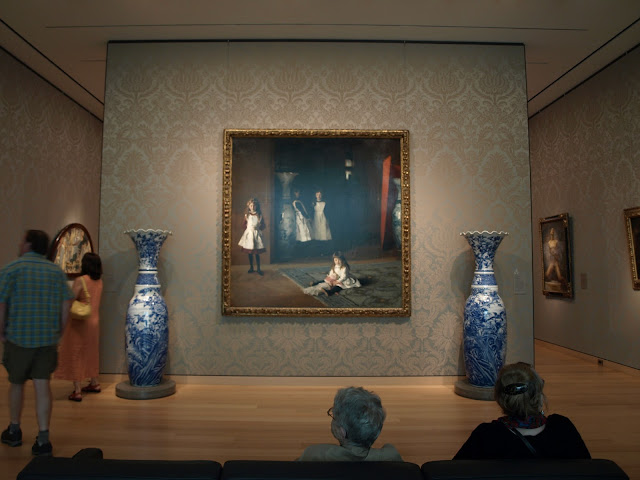 today it was time to say goodbye to the museum of fine arts in boston. its one of the largest museums in the usa, and has its own subway stop named, ofcourse, "museum of fine arts". once someone put an F in front of arts, but that was quickly removed....
me and tim have visited this museum many, many times. sometimes we went for a special exhibit, sometimes just because we had nothing else to do. we always very much enjoyed it and i was a little sad walking there today for the last time (at least for now...!). dutch as we are, we never paid the steep entrance fee of 25 dollars (when we came, in 2010, it was 20), as we could go with our bank card for free every first weekend of the month, and each wednesday its free from 4 pm onwards for everyone (you can, however, make a donation. i donated some money in the gift shop today ;) ).
the museum is gigantic and has a very wide variety of art. we would often would get lost, despite having visited it so often. there were 2 pieces i liked to visit every time we went there (also to again try to take pictures of them, never satisfied when at home), and today i said bye to them.. :) (ooh, how dramatic! ;) ). the first you see above. its from the american painter john singer sargent. i had never heard of him before, but visiting museums throughout the usa we started to recognize his paintings. they are always beautiful, and full of detail. this one is named "the daughters of edward darley boit", painted in 1882.
the ladies were sitting there and didnt move... so then i decided to include them in my picture... :)
Tweet
Pin It
Labels: free entrance, museum, photographing strangers
Posted by CaT at 11:50 PM

Oh, a sad leave-taking. Come back to visit!

But lucky for you. You can now explore some newly opened musea in amsterdam with also some interesting works to visit.

I like the painting, had never heard of the artist either.

He's well known in the U.S.

Look at it this way: you'll know at least one favorite place you'd want to visit if/when you come back to the U.S.