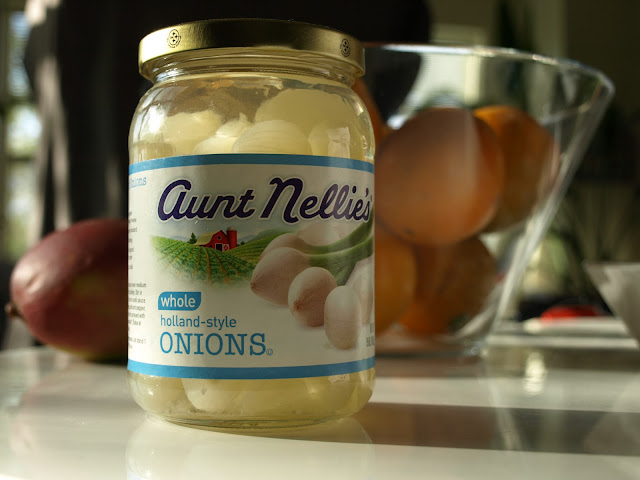 quite a while back i saw this product in "our" supermarket here in the usa. of course, i had to buy that! i know we often had them at home, although i wasnt the biggest fan of them. when trying these, i was really disappointed. those were nothing like the dutch "zilveruitjes" (pickled silverskin onions). they were not at all crunchy, as they are supposed to be... :( so... after one bite they were left in the fridge for months, since i first wanted to take a picture before trashing them... maybe we had a bad batch, but i think these are just american style holland-style onions (the barn in the background also looks more american than dutch to me).
wikipedia tells me that you can hardly find these onions fresh, they are almost always already pickled (like above), and are often eaten as a snack (with a beer or something), but are also used in soups (never had that, i think) or in casseroles.
its funny how almost everyone always refers to "the netherlands" as "holland". i myself never do that, but have noticed that sometimes people then dont know which country you are talking about. but as soon as you mention holland, they will say "aaaah... amsterdam....". for an entertaining video explaining the difference between the netherlands and holland, go here (it was going around on facebook at some point). warning; during the 4 minutes they manage to make it actually really complicated!! :)
Tweet
Pin It
Labels: food, the netherlands, very american
Posted by CaT at 10:47 PM

They look like dutch "zilveruitjes", I would have bought them too. What a shame they were not what you expected.

Processed foods are so often a disappointment. My grandmother used to make the best dill pickles. I've only found one kind that even starts to approach them and they're still not that good. I hope that you're not disappointed with the authentic foods when you get back to the Netherlands!

The video regarding Holland vs. The Netherlands was extremely educational. Thank you.

Some people like to eat creamed onions and peas here.