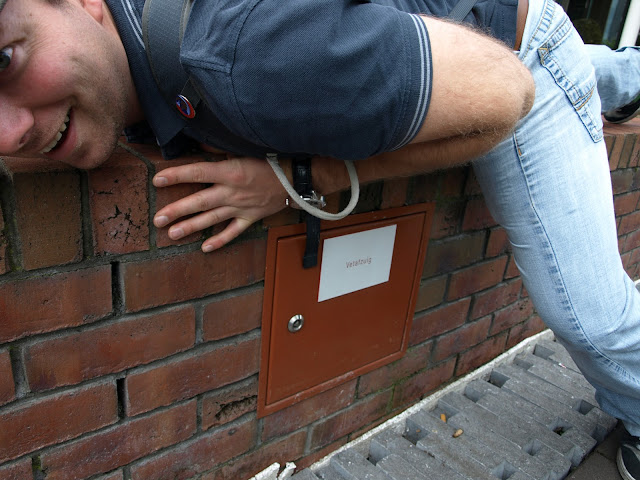 in the us i was always looking for weird signs, and i found plenty. so i was glad to see that weird signs are also present in amsterdam. this is next to the terrace of some hotel in amsterdam, and the sign says "vetafzuig", which literally means "liposuction". eeehhh?! tim tried it by lying on top of the wall, but nothing happened..... too bad! (perhaps you need the key to that box in the wall..?)
yesterday we went to ikea as i needed a new mattrass. so sad, since i had just trashed our perfectly fine mattresses in boston... :((( we needed some small stuff too, so we ended up going twice, by subway, to ikea (no more huge car). it took more or less the entire day and gave us quite the workout (and public transport is so expensive... buuuh, that certainly didnt change in my absence).
i tried to bake my first bread, but the yeast i had was different and the bread didnt rise.... but well... lets see... :)

Oh Cat, this is so funny, a liposuction on the wall, ha,ha. Did you take a mattrass in the metro? That must have been fun to see! I am looking forward to your next photo.

Funny CaT. This is your first post from Amsterdam that I have had a chance to see. I will go back and read the past week or two to see how the move from the USA to EU went. Good luck!

I'm sure Wikipedia could advise you on how to get a street vetafzuig. Perhaps Tim should have knelt down and stuck his belly button on that little keyway?