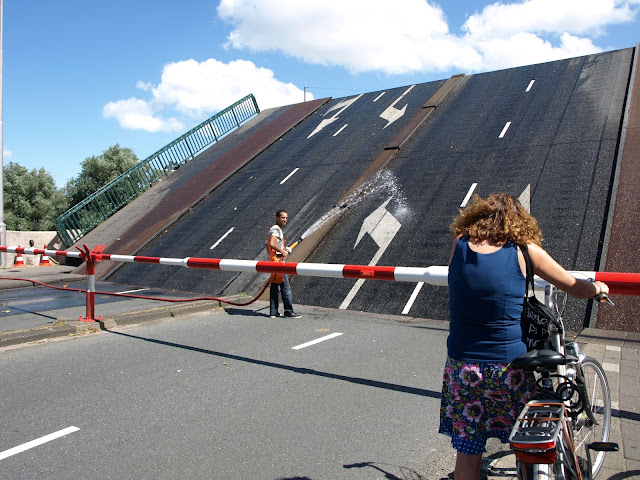 amsterdam has some 1700 bridges, many of them very old and cute, but i managed to picture a boring one!! the first bridge, and still standing, was built in the 14th century (which obviously isnt the one above), so there has been some time to get to over 1700 of them.
when it was so hot, the past weeks (now it has cooled down a bit, and every now and then we have some rain showers, but all in all its still pleasant), the bridges had some trouble. they need to open to let boats pass, but when temperatures rise over 25C (77F), this can give rise to some serious trouble; once open they cant close anymore, or vice versa, which can cause serious damage to those (historic) bridges. so they need to be kept cool with water as you can see above. however... at some point it was just so hot that some of the bridges expanded anyways, and cooling with water did not help. as a result, the bridges were just kept closed (too bad for the boats wanting to pass!).
Tweet
Pin It
Labels: amsterdam streets, crazy weather
Posted by CaT at 11:52 AM

Yes, that's a problem in Amsterdam and will always be. Even when we married in 1970 in June the tramway tracks were curling up in a bridge near the Carre theater and had to be watered too. Glad I was away with the last heatwave.

Really! We have bridges like this in the USA, and it gets a lot hotter than 77 degrees all summer long, but I have never seen anyone spraying them or heard about them not working in that kind of weather.