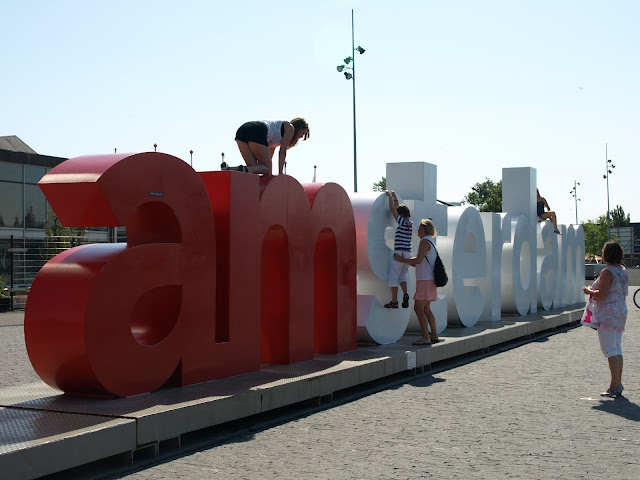 this is the I Amsterdam sculpture in amsterdam (actually, there are 3, one at the museumplein, one at the airport and the one above, which apparently changes location every now and then. here its in amsterdam north. the entire sign says "i amsterdam", with the i am in red. climbing is optional. a small note on the side of the sculpture actually says that climbing is at your own risk and that its not made for that, but everyone does it anyways. not like similarly large sculptures in the US, where climbing is not allowed and where that is strictly enforced (like with this sculpture that was really a huge climbing temptation for many).
the girl crawling around on the top had some trouble getting off the sculpture again, but not before her mom had taken several pics!
Tweet
Pin It
Labels: amsterdam, tourists, weird sign
Posted by CaT at 5:54 PM

I saw the one at museumplatz but no one was climbing and I didn't know people do that.

When I was about your age, there was a big "LOVE" sculpture by Robert Indiana [google it if you aren't familiar with it] on the plaza at Boston's City Hall. I climbed it and my wife stood in front and someone took a picture. That picture was around the house for decades. I wonder where it went.

That's a nice piece of art/graphics. I don't think I'd climb it but I sure would want my picture taken with it.

Good for the girl, didn't know they change places, I saw one once at IJburg too.