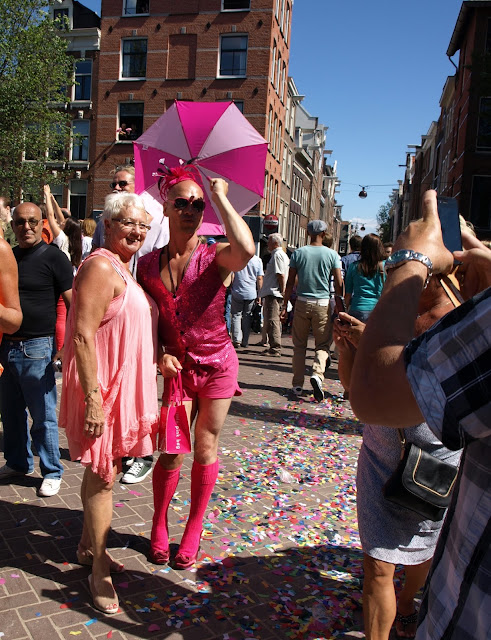 this man was posing for photos with anyone who was interested... only the back of his gilet was black..... and his heels were quite high!! this was on the gay parade in amsterdam, beginning of august. and now its september already.... days are starter to be shorter again, and since yesterday it became noticeably colder... it might be that summer is really over now... buuuhhh!
today is theme day, and the theme is... pink! at first i wanted to show our living room (again; we made quite some changes), but looking at the photos it all looks still too messy, we really first need to tidy it (at least) a bit.
for the other pink participants, go here!
Tweet
Pin It
Labels: amsterdam streets, people photographing, photographing strangers, posing, theme day
Posted by CaT at 5:08 PM

He's posing! Very pink and out there!

It look's like he's got pink down to an art.

Hope you'll post your living room again soon. I'd like to see how it's coming along. . .and what Jack will have to say about your latest changes! ;->

So far, the house has pink and orange walls and a purple ceiling. Fun!

Terrific one for theme day! I love his posing.

Looks like there are plenty of people interested in having a photo with him, too. Interesting photo and scene!

He was actually not even that noticeable with all the other pink people!!

Well that is pink for sure!

Excellent choice for this theme day. Have a good week!