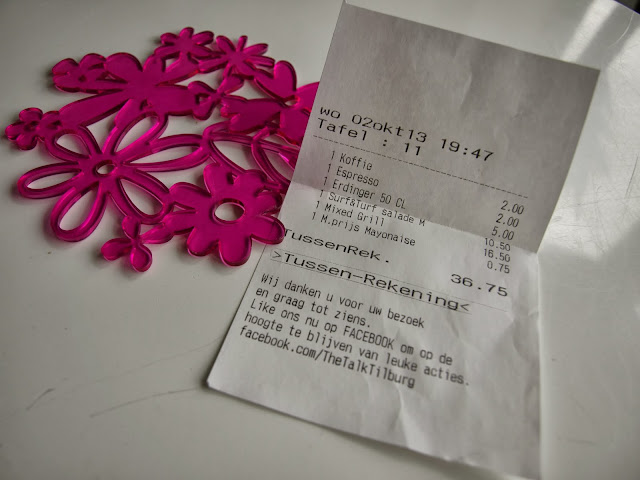 on my birthday, it was actually only the second time we went out to dinner since i am back in the netherlands. as i mentioned before, going out to dinner here is just so much more expensive, much slower (which can be a good thing), and the service... well... it can be OK, but often it is less than that or even plain awful. however, at least the food is usually much tastier :)
in the usa, it took me quite a while to get used to the overly friendly (and to me a little fake) "Hi, my name is ... and i will be taking care of you today. please let me you if you need anything, ok?" but it was not difficult to get used to the endless possibilities when ordering. at first it was a bit intimidating, and i was always jealous of the real americans ordering exactly what they want, without the waitress having to sum up all the possibilities (types of dressing, bread, size, types of milk etc etc). it surely took me a while before i could order like that..., and i was real proud when i could!! :D
so... now back to dutch dining. i guess it will be shocking for americans. it might take ages before they notice you are there and want to order something. you will not get water automatically (more often than not there will be a note on the menu saying that they dont serve water. unless you pay for bottled water). you will not be able to order salad A with dressing from salad B, and you will not be allowed to take your leftovers home (but the portions arent crazy big like in the US so thats usually not an issue anyways). moreover, you will have to pay for everything. see that bill above? it lists a 0.75 cents (about a dollar) charge for the mayonnaise!! here in the netherlands we eat our fries with mayonnaise, but you will always have to pay for it. this is even the case at mc donalds!! i liked that in the USA there was always a ketchup bottle on the table, and it was never a problem when we asked for some mayo, they would just bring it (and not bill it!).
now when we sat down, the waitress asked what we liked to drink. tim wanted a beer, and he could choose between a normal or a large (0.5 ltr) size. then i said to him; lets take the large and we will just share it! (i also still have to get used to the fact that now everyone can understand again what i say, although in the US sharing has never been a problem). when the beer finally came, the guy bringing it put it in the middle of the table and said "i understood you want to share this beer??!!" and then put 2 straws in the beer. only when he left i understood this snark... i actually should have called him back to explain himself, but i didnt want to make a scene. but thinking about it still pisses me off!! we were there to enjoy ourselves and drink as much as WE want, even if that means sharing one beer. and as you see, 2 entrees, 1 beer and 2 coffees came down to 37 euros, which is 50 dollars (at least there is no 20% tip as waiters here get a normal salary. you can tip as you  like, or not tip at all, although they will not appreciate no tip at all)
Tweet
Pin It
Labels: food, things i miss, very american, very dutch
Posted by CaT at 8:28 AM

NOOOOOOO WAAAAAAYYYY How did I miss your birthday??? Buuhhhhh! Sorry!!! Alsnog gefeliciteerd mevrouw!

I certainly hope the snarky waiter didn't get a tip for that behavior! I guess I'll put up with the "Hi, I'm Tiffany! I'll be your new best friend until you've paid the bill and left!" It's fake, but not so snotty.

One of the things I like best about European meals is that they are much more reasonable in size. It bothers me in the USA when I get a humongous meal that is bigger than anyone should eat at a single seating.

You shouldn't have mentioned you wanted to share, just do it. I don't think the straw is insulting, just a kind of humor, other culture, other rules.(Tilburgse humor?)