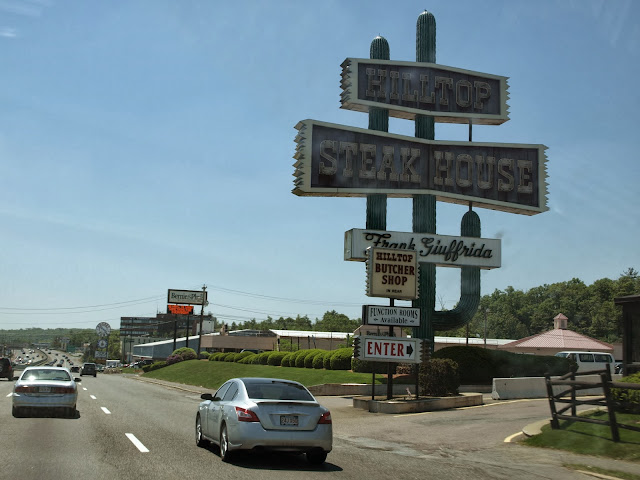 of course i still follow the news from boston every now and then... but the news that the above restaurant is closing i first saw on facebook... when i saw it posted here as well, i knew it was true... this is on route 1, in saugus, not too far from our apartment, and so we drove by it quite often in weekends. the lawn is decorated with lifesize cows, and the place (just like the cactus) is gigantic. at first we were hesitant to visit the place (after the cows and the cactus we were afraid what would be inside), but once we finally did, we kept coming back every now and then. for me it was not so much about the food (the vegetables were absolutely awful, even the corn!! but tim loved the baked potato), but more the "experience". i think the decor has never changed since it was built (the 2 story restaurant opened in 1961), and i wouldnt be surprised if the waitresses were still the same as well (once our waitress asked tim when we got seated; "whats the matter son, you hungry or somethin?!" with that typical boston accent). there is crazy carpet on the floors, beautiful booths to sit in and weird cowboy-stuff on the walls. i think some of the guests had been coming there since its opening as well, so every time we were there i just couldnt get enough of watching around... if only i had been brave enough to take pictures from the inside, had asked people for portraits... but well, i didnt... (here is the last burger i had there).
according to this article, at its top days, the hilltop employed 50 cooks, 180 waiters and served 5000 meals a day. when we were there, it was usually not too busy (except the one time we took someone there and had to wait over an hour). this picture was during our last drive on route 1, we had just had to bring our couch to the dump and i was frantically photographing all that crazy american stuff on route 1 one more time... for us foreigners, this was really a typical american place, like we see in the movies, and if we were ever to visit boston again, it would be a place to go back to. but.... they are closing october 20th already!! i wonder what will happen to it. i hope at least the cactus will stay.... (and they should make a museum out of the place!!)
here you can see a video about the closing (they interview 2 guests inside the restaurant)
Tweet
Pin It
Labels: food, very american, weird sign, while driving
Posted by CaT at 4:22 AM

I read about this, too. Hilltop was hugely popular when I was your age. The lines went out the door. The beef was good, but the vegetables were always horrible. But, in those days, dining was not at all as refined as it is today, and no other restaurants were much better. It seems that they didn't keep up with the times and upgrade as other restaurants upgraded.

It is always a bit sad when longtime institutions close, but my guess is that Hilltop deserved to lose its clientele and close.

It's so sad when pieces of history close.

Usually the owners and/or clientele get too old and tired to keep it up and no one steps forward to buy the place and keep it going. Or somebody sued for a cholesterol overdose...and won.

now that the news is out they are closing, the wait to get a table became 3 hours this weekend!! :) (i read... i wasnt there ofcourse, haha)