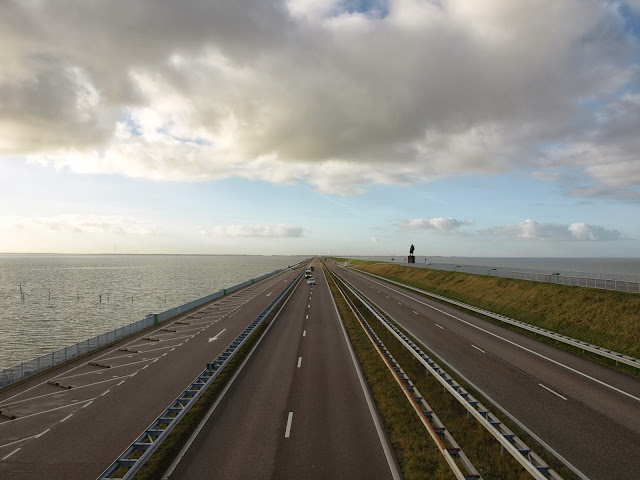 yes, yesterdays and todays post were taken at the "afsluitdijk", literally the "enclosure dam". it is a 32 kilometer (20 miles) long dike, between the dutch provinces north holland and friesland, and was built between 1927 and 1933. by building this dam, the zuiderzee ("southern sea"; a salt water inlet of the north sea) was transformed into a fresh water lake (ijsselmeer). this dam protects the dutch from floods, and allowed them to claim new land from the fresh water lake. this resulted in an entire new province in the netherlands, called "flevoland"!
so, above you see the sea to the right, and the sea-tunred-into-lake to the left as a result of this dam. we stopped at the memorial, here i am standing at the bridge they built to cross and have an outlook over the highway on the dam. it is at the location where the dam was eventually closed in 1932. this huge project resulted in a lot of jobs and relieved unemployment during the great depression. the american society of civil engineers declared it one of the 7 wonders of the modern world. to the right you see a statue staring out over the ijsselmeer. this is the dutch civil engineer cornelis lely. already in 1891 he formulated a plan that would become the basis for this dike and thus the damming of the zuiderzee.
Tweet
Pin It
Labels: on the water, the netherlands
Posted by CaT at 2:36 AM

You captured the scene just perfect. It appears to stretch on for infinity.

Lots of farmland in California was reclaimed through dikes (and made into farmland by importing water). But the dikes aren't being terribly well maintained and for years there's been discussion about this, and what might happen in a big earthquake. I'll bet the Dutch take maintenance a lot more seriously, especially in Flevoland!

This is an impressive sight. The Dutch people have been remarkably inventive in dealing with the land and the sea.