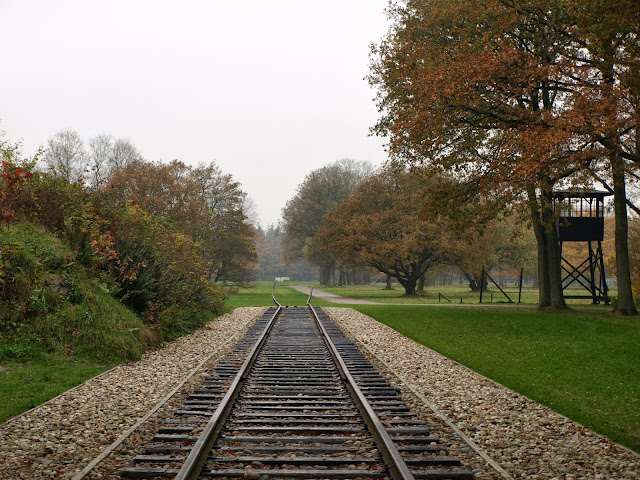 i want to show one more picture of westerbork. above you see where the actual camp used to be. nothing is left of it nowadays, except for the house of the camp commander at the opposite entrance. the railroad you see above is the national westerbork memorial, designed by ralph prins in 1970, who was a former prisoner and one of the few survivors. it is at the location where the train arriving in westerbork came to a standstill. none of the materials used for the memorial are derived from the actual railroad. it consists of 93 railway sleepers, representing the 93 outgoing cargo trains, transporting prisoners from this site to concentration camps in germany or poland. anne frank and her family were among those that were put in the first of the 3 final train transports in september 1944.
as you can see, the rails is curled up near the entrance to the camp. with this, the artist wanted to show the despair and bewilderment that what happened here is possible in our world.
Tweet
Pin It
Labels: the netherlands
Posted by CaT at 6:21 PM

This is such a chilling post, along with yesterday's card. I'm glad you've posted it and I'm glad that people still find it moving. I worry sometimes that the world seems too willing to bury atrocities.