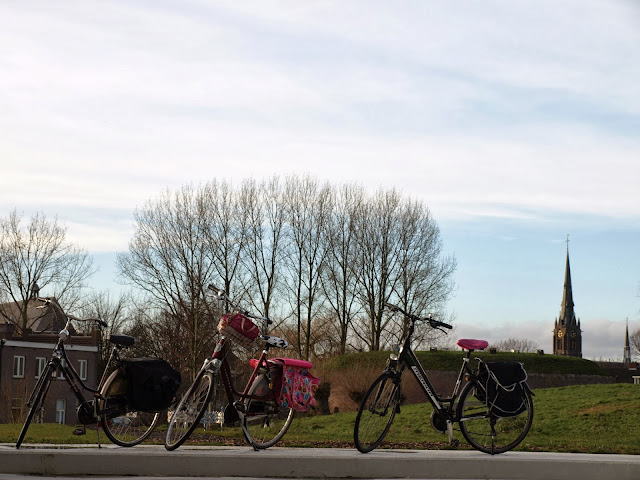 while we had yet another storm on the 24th with lots of rain and wind, christmas day was rather sunny and not too cold. as you might know, we dont have a car anymore. so.... yesterday we decided to bike to my parents instead of going there by public transport. the time it would take was probably the same anyways, only the effort would be different... :) and so we went, first through the rather empty city center of amsterdam (how lovely it is to bike through sunny amsterdam when its nearly empty, without annoying scooters, especially!), then through diemen, and then finally along the provincial higway with some headwind, to weesp (this is approximately how we biked, how nice of google to also provide biking routes!). it took us just a little over an hour, without arriving exhausted.
above our bikes, the most colorful one in the middle of course is mine! the third is my sisters, we did a tiny bit of sightseeing in weesp as well during the day.
we didnt really plan to also bike the entire way back in the evening, but instead bike to the nearest subway station and take the bike with us. but as we were going, we decided we could as well bike it again. there was just one scary part along the provincial highway that was literally pitch dark; not one street light! the lights on our bikes were not strong enough and so we could go only very slowly, afraid to ride into the ditch next to the bike path. when a car approached us from the opposite direction, we literally had to stop biking as his (big!! grrrr) lights were blinding us entirely, already while he was still i guess hundred metres away from us. luckily that was only once and the remainder of our journey there was enough light (especially in amsterdam street lights are plenty).....
if we still had had the car, we most likely wouldnt have done this, but it was fun!
Tweet
Pin It
Labels: bike, the netherlands
Posted by CaT at 2:25 AM

That must have been nice to cycle all the way. The weather was great indeed after the storms. The dark is scary, we have a partly unlighted road here too and although I have cycled there so many times, it frightens me in the dark. Try to watch the grass side to see when there is a bend coming.

Glad you made it home safe and sound!