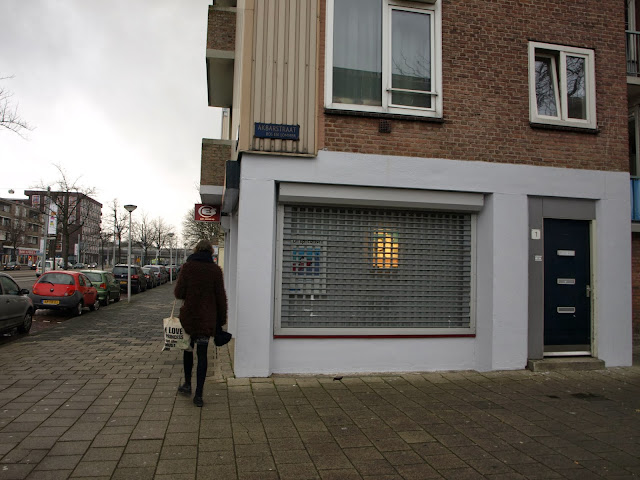 BOLO is the neighborhood we currently live in. its short for "bos en lommer". wikipedia tells me the neighborhood was named bos en lommer after a farm that was demolished in 1940 (it must have looked something like this, with a thatched roof). at the place of the farm is now a little (and quite sad) shopping square where we get most of our groceries. its hard to imagine how this area must have looked so many years ago! the english wikipedia about our neighborhood is just a few sentences, and describes, sadly, what it kind of is. i will just copy it here: "Situated in the west of Amsterdam, the Bos en Lommer quarter offers easy access to both the exit way (A10 West) and public transport. Most of the buildings are four-storey high apartment blocks, with relatively low rents. Bos en Lommer is scheduled for urban renewal to increase high-income inhabitants in the hope that there will then be a decrease in crime, noise and litter."
above a street a little further from our apartment. just a few 100 metres further my bike got stolen back in august. wheneveer i pass this place, i am still looking for it, but of course... its not there.. :( i actually wanted to photograph the name of the street; its called "akbarstreet". akbar was an indian emperor in the 16th century who advocated tolerance for minorities. the street was named after akbar in the 60s. i wanted to know why, but all i could find was an old article from 2002, describing a reporter visiting some of the people living in this street (and in the BOLO quarter). many of them were (and still are) originally from morocco. he asks them why there is so much trash lying on the streets, even though trash is collected every day, mentioning that in morocco streets dont look like this. the answer is interesting; "well, over there they dont collect the trash so you have to clean it up yourselves!"
anyways.... can you see the bag of the lady?! its quite weird. it says: "i love [a] princess but she must die". eehmmmm?!
Tweet
Pin It
Labels: amsterdam streets, photographing strangers, the netherlands
Posted by CaT at 5:46 PM

Nice write-up. I just found a photo of how it looked at my favorite cafe many years ago. Dirt road and a farm.

Bos and Lommer is not the prettiest place to live I am afraid. I had never heard of the nickname BOLO. Trash in the streets is everywhere, it is something new what wasn't like that before for a long time. It seems nobody cares anymore.The dutch are becoming an indifferent dirty nation.

It's sad to lose farmlands, especially when they're paved over. I really don't miss city life.