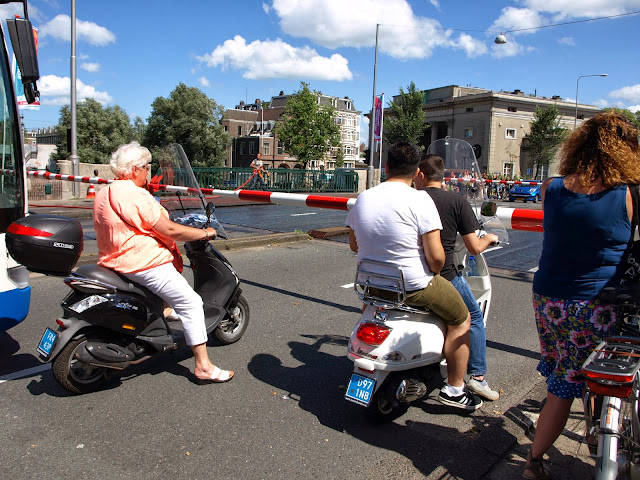 biking in amsterdam can be crazy at times. there are so many bikes! and they are all in such a hurry (or not, and then they slow you down...). then there are the cars, buses, pedestrians, trams, tourists. tourists on the bike lane. tourists on bikes on the bike lane.... but the absolutely worst are the stupid scooters you can see above! those things above are for lazy people!! people who dont want to bike... obviously, its not that warm in the netherlands anymore; this was taken back in august.. heres the problem; the blue license plate indicates that they are allowed on the bike lane, yet they go much faster than bikes! officially they may go 25 km/h (a helmet is not required, one of the reasons they are so popular!!), but often they go much faster. so biking is almost never peaceful, at least not in amsterdam; there is always a scooter wanting to pass you; if they cant, they usually will continue to honk until you move aside (and many get aggressive when you dont move, or not fast enough, i always refer to them as terrorists for that reason), or they just zip right past you at crazy speed, scaring you in the process (or nearly bumping into incoming traffic). worst of all; like i wrote before, scooters are also used to rob bicyclists of their possessions. when passing you, they just grab your bag right from your shoulder... seriously, these machines are one of the reasons i often do not enjoy biking in amsterdam.... since they are faster, they are also in front of you when waiting for a traffic light. really nice, inhaling all those exhaust fumes!
well, i saw on the news this week im not the only one!! most bikers really dislike them and, also not unimportant, in most traffic accidents a scooter is involved. so... many people say they should be banned from the bike lane, and move to the "normal road", together with the cars. tests are being conducted to see whether this is safer. i think for sure its safer for the bicyclists, but not for the scooters; now they will be the slower ones amongst the cars. perhaps then they will finally realize how it feels to be chased by a motorized vehicle.....
Tweet
Pin It
Labels: bike, the netherlands
Posted by CaT at 5:51 PM

The lady in orange doesn't look like much of a terrorist!

haha, yes, the lady might (might!) be an exception to the rule... :)
but simply the difference in speed and size makes it quite unpleasant. bike lanes were really made for bikes, and these things are just too big!

They are a real danger on the roads in Amsterdam. Stupid lazy people who use them, mostly even young people.

They are also a pain in the butt here.

It sounds like it's time for a change. I can't imagine them sharing bike lanes; but then, we barely have bike lanes in the U.S.

(BTW, re: Penguin Santas. I hadn't read about them before, but I'm not always on top of trends (our newspaper is sometimes only 3-4 pages of "news," most of it local). Interesting idea. Do you think the Dutch might consider it instead of Black Pete?)