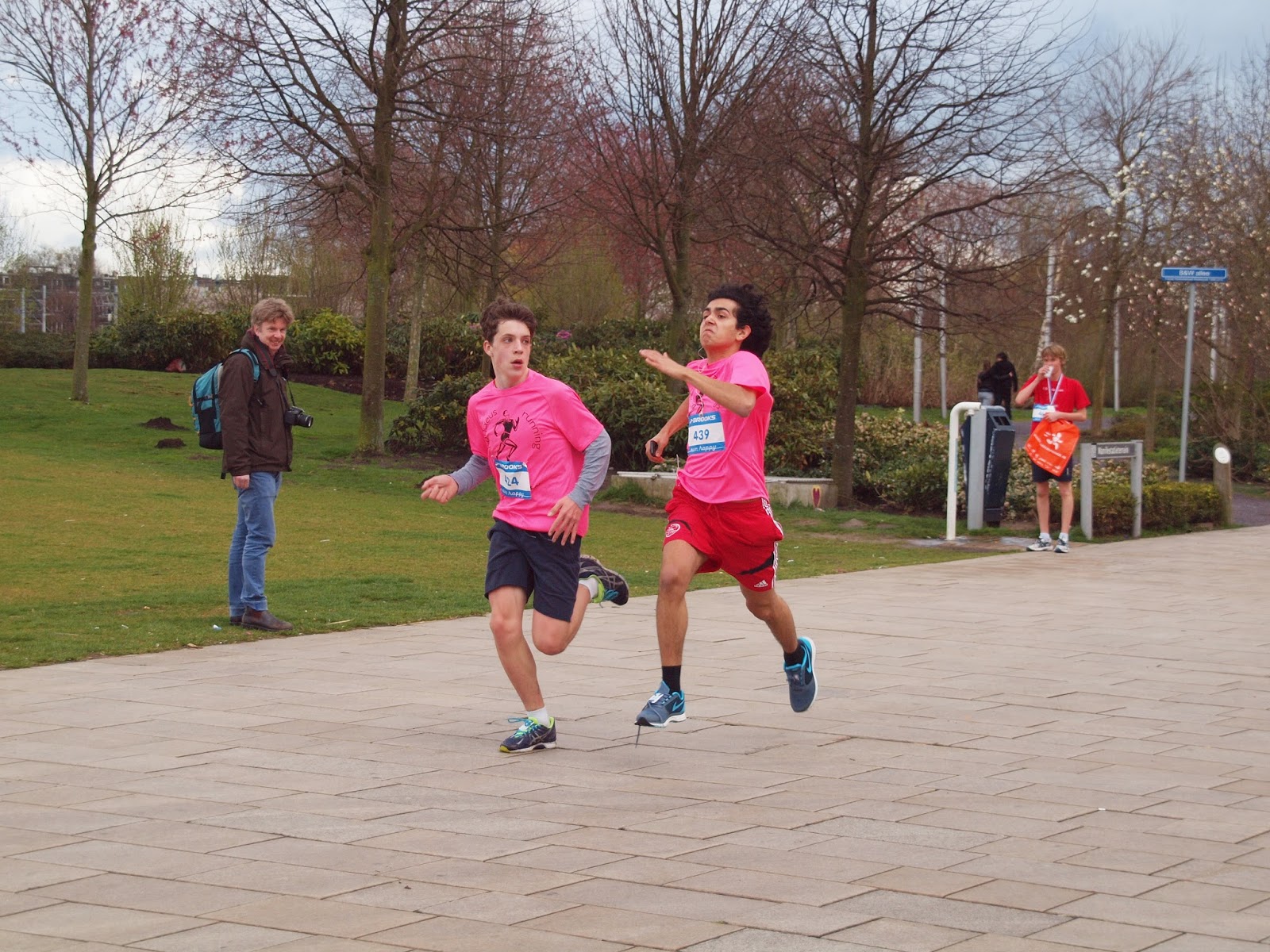 as i had recently done the 7.5 km race, i thought tim should do one as well. so... i signed him up for a 10K this sunday, also in our neighborhood. the weather was less perfect than when i had to run, but it all started out fine. there were quite a bit more contestants, and i didnt really know the route they were running, so i decided to just wait at the fnish to take some pictures. at the start i already couldnt find him, but later on tim at least recognized his black cap in a few of the pics, whahahaha. a 5K and 10K run started at the same time, and before i knew, the first had finished (in under 20 minutes!!). there was a group of young people in pink shirts from an amsterdam high school. these 2 5K runners had ran together, but right at the finish the one in red trousers decided to pick up the pace. it was so funny to see! they looked at each other and then ran the last few metres like crazy, i think the red trousered boy was first!
just around the time i was expecting tim, it started to rain. and real hard. even some hail came down. beeehhh. so i almost missed him again... and he didnt see me at all, too focused on running. he did it in 49 minutes, 11 minutes faster than his practice time!! (and more than 15 minutes faster than i would...). i thought it really was a nice race, with a 5K, 10K and a half marathon, as well as a 1K kids run (that was the cutest to see). here are some more pictures.
today obama is visiting the rijksmuseum in amsterdam. apparently, the entire museum square is off limits because of that. as the dutch are also hosting the nuclear security summit, the hague is impossible to reach as well, and its forbidden to take pictures at our airport, even at the panorama deck for the time being. i guess its the best time to leave the country for a bit!

Tweet
Pin It
Labels: amsterdam, photographing strangers, running
Posted by CaT at 3:30 AM

Excellent! You click your camera at just the right moment and captured a very determined look on the young man's face.

I love to make photography and to run! Its awesome

That is a funny picture of the two. Their faces tell a story!

Your link provided lots of great photos of the race, and I loved the kids' photos. Where it Tim's pictures?! Biebriebels posted a number of photos of Obama, which I loved seeing. Lucky for him that he is in your beautiful country!!

Looks like these guys were quite a ways in front of any competition.

Well done. I take a lot of race photos and it is fun to catch the young folks as they sprint at the end.