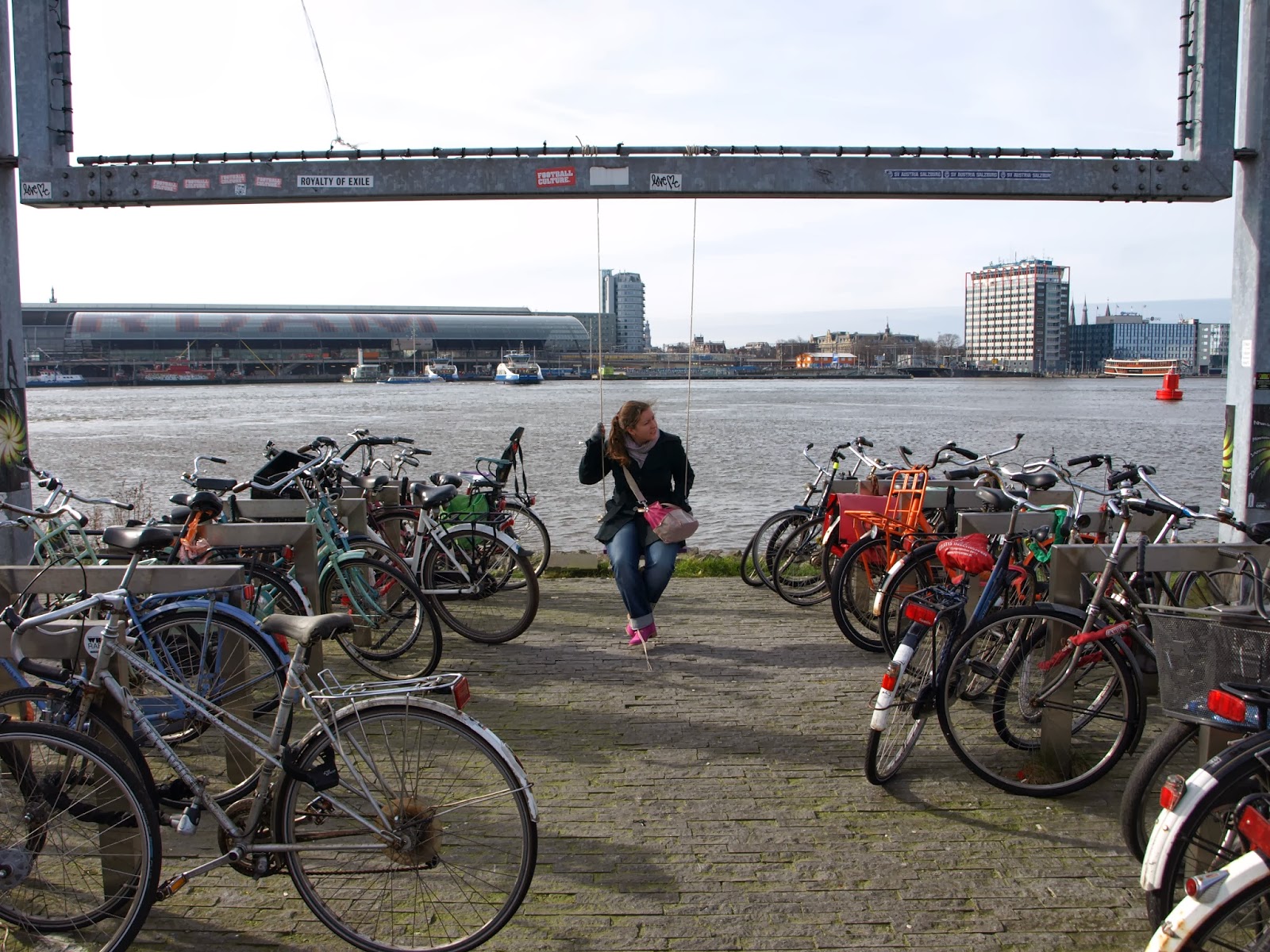 somehow one day not posting led to another, which led to a week, and then another..... and then i got clear evidence nobody actually was waiting for my posts; nobody seemed to miss them. and then i just didnt want to post since i was not posting. then i wanted to make it an entire month of not posting. then finally (finally!) someone officially asked me where i was hiding. by then tim had been demanding a new post for a few days, and i refused. and then it was a month and a few days. and well.... here i am again, with a picture of me, instead of one taken by me... :)
this is in amsterdam noord (amsterdam north), across the ij river you see the amsterdam train station. i guess its still not finished, now the roof says rdam (r'dam, which is short for rotterdam, that other dutch city. a'dam is what it should have been). and then there is me, on a swing, attached to a billboard frame. i wonder who placed the swing there, in between the bike racks. you see more and more of these kind of racks, as opposed to the ones where you have to put your front wheel in (something that often damages the wheel). recently i discovered they call such a rack a "nietje", which is dutch for staple. but anyways, when there is a swing, i need to sit in it. often i dont fit (some of you might understand, lets not go into details here), but here i did! then i wondered whether the ropes were strong enough (they didnt really seem very strong), so i got off after tim took some pics (unharmed, at least..)
lets see if there is renewed determination to post more regularly. in another month this blog exists 4 years, and i have never been absent for a month! until now, that was....
Tweet
Pin It
Labels: amsterdam, CaT, self portrait
Posted by CaT at 6:23 PM

Welcome back! Good shot, Tim! (I think we need to team up to keep CaT motivated.)

Count me in as someone who MISSED your postings. You're back (maybe?) with an awesome shot. Just because I don't always leave a comment doesn't mean I'm not looking. I enjoy every photo you place on your blog. So get that camera and keep on clicking. :)

Well of course I missed you, but one never knows why somebody is stopping suddenly.You mentioned before considering to stop blogging, so I presumed you finally did so. But I kept looking if you maybe would return and so you did, welcome back to the "blogging club"! And I agree with Andy keep clicking.

It is good to see you back. I understand that it can become tiring trying to put up a post every day and sometimes bloggers get burned out. When that happens, I leave them alone. If they want to return, as you did, I am glad to see them, but I don't want to bother someone who appears not to want to be seen.

Glad you are back.