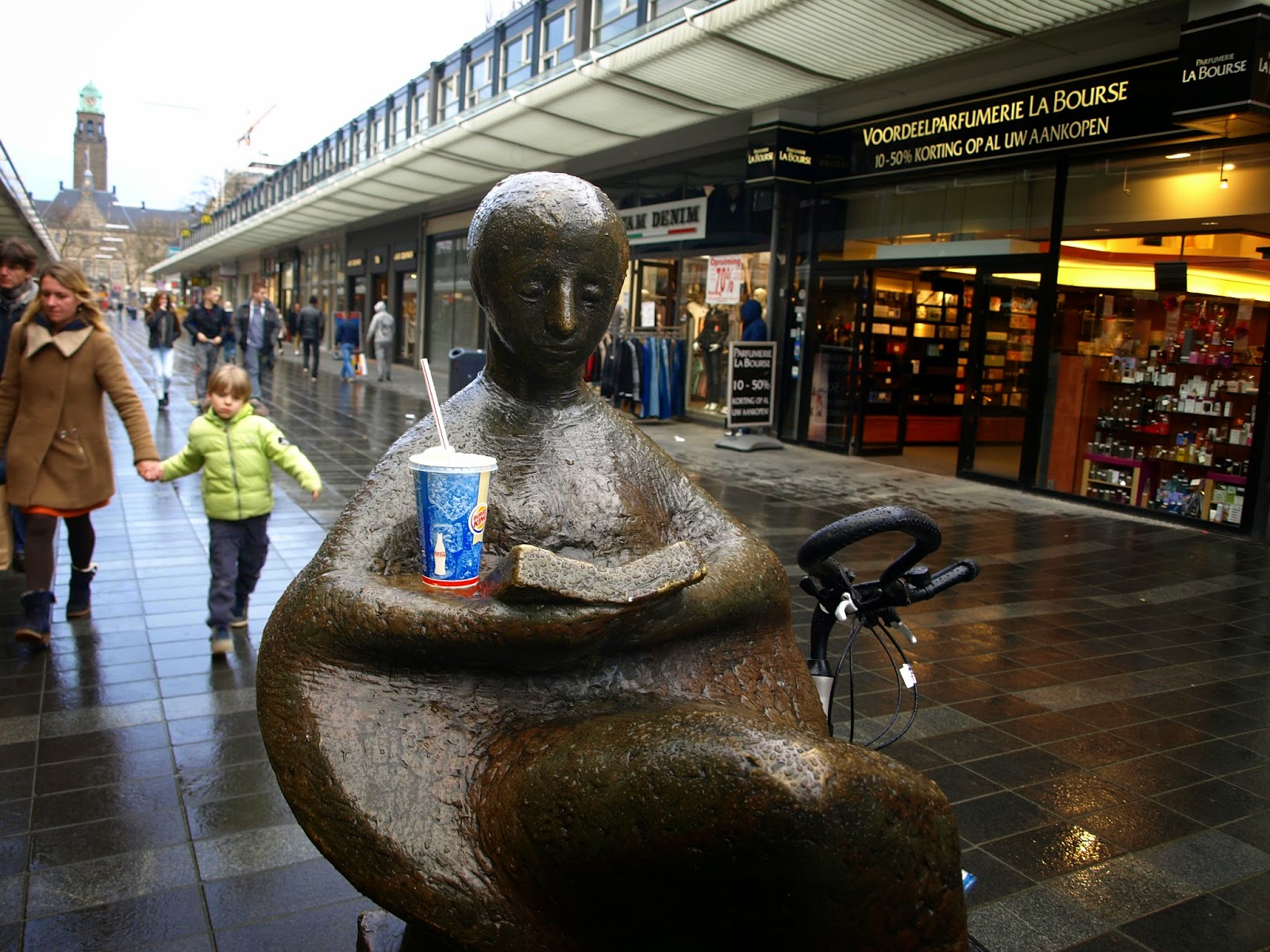 i took this picture a while back in Rotterdam. although i dont like that people are this lazy, it was a bit funny to see this "forgotten" cup on this statue. after taking some pictures tim threw it away.
so yes, we have these cups as well, but you see them far and far less on the street than in the usa. there i sometimes had the feeling that people could just not leave the house unless they had a cup in their hand (or at least bought it on their way to wherever). i have seen coffee being spilled on other passengers in the subway, and well.... i never understood the need to always have a huge ice coffee (usually only drunk halfway and then thrown away, or placed somewhere, anywhere, and then forgotten).
for my work, i have to take the train and then the bus. its quite the commute (at least 1.5 hours one way), so i have to get up really early (to still arrive relatively late, grrrr), and i am not a morning person!! my tolerance for anything in the morning is very low, and im happy that its not that crowded yet due to holidays (but i truly fear when those days are over). i am annoyed when other people walk too slow, when they are in my way, when they talk loud in the train, when they come sit too close to me, when there is no place to sit, when i miss my train or when the train is delayed..... but!! at least dutch people dont really have this habit of always having a coffee with them, and something smelly to eat in the early morning (so far, i have only encountered a few... :) ). ah, women do do their make up in the train (annoys me as well), or paint their nails (drives me crazy), and there are even people who clip their nails (how on earth do they think thats socially acceptable???!), and on the way back every now and then you encounter the typical sad male with a can of beer.... (i really dont understand that either. someone recently said that those people are alcoholics, but im not sure...?)
Tweet
Pin It
Labels: forgotten drink, the netherlands
Posted by CaT at 4:53 PM

Perhaps the cup was placed there as a joke. I think your ride would be more pleasant if you had a smart phone or if you read a book along the way.

haha, yes.... i wonder how often that happens though!
na, i dont want a smart phone (but just like in the US, most people are indeed spending their time in the train on such a device). in the morning im still too tired to read a book (i hope it will get better once i am getting used to this rhythm...), so i just quickly read the free newspaper and then try to "sleep" a bit.... :)

That looks very wet, but a funny picture, some people do funny things sometimes. We saw in Norway once a statue of a sitting person where a wineglass and a sigaret was put in his hand.

I think Kate is right. Someone put the cup there to be funny.

Sorry your commute is so long and that you have such a long list of things you don't like. Americans are famous for their take-out coffee . . . we are always in a rush and don't take the time to sit and enjoy it at a cafe.