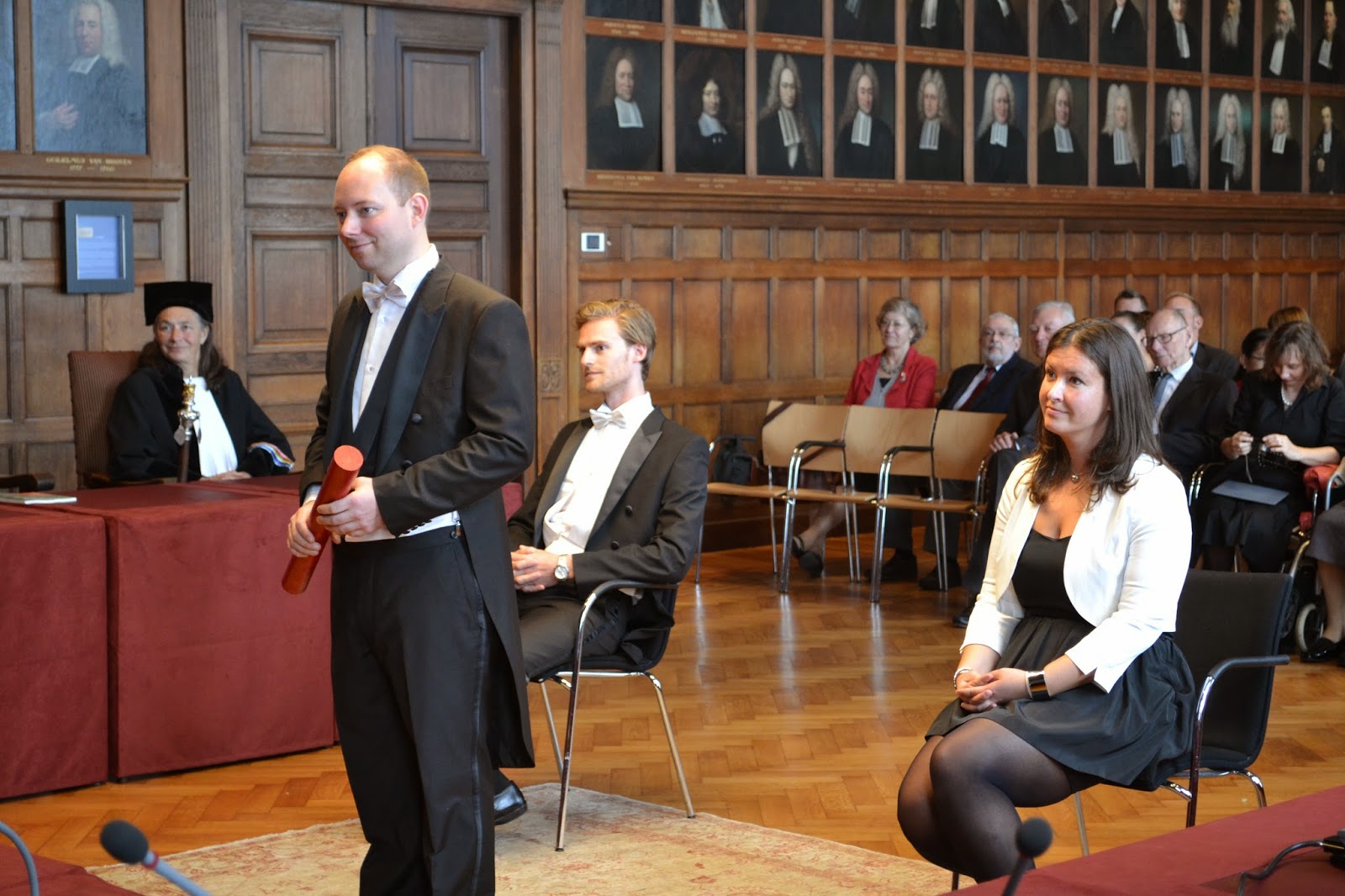 so. not yesterday, but the day before already tim defended his PhD thesis. that took 45 minutes, as tradition dictates. when the 45 minutes were over, the lady with the black hat came into the room, hit her stick onto the ground to indicate the defense was done. then all the professors (you cannot see them, they are in front of tim here, sitting behind the red tables) went into some room to decide whether tim should get his PhD. after a short while they came back, and yes, he got it! in the photo above (taken by my sister, the official tim-phd-defense-photographer), tim just got his diploma, its in the red thingie he is holding in his hands. right now he is listening to the "laudatio" given by his PhD advisor. 2 "paranimfen" are sitting behind tim (one of them being me, perhaps you can figure out which one! ;) ). paranymphs are similar to best men/bridesmaids in weddings... as in fact you marry the university (really!! i always said so, and now i read wikipedia says the same, so it must be true!). nowadays, the role of the paranymph is purely ceremonial, but in the old days they could also help answering questions during the defense. in fact, we all 3 worked in the same lab (yes, i worked a bit with tim, and yes, even one chapter in his thesis is actually "my" paper!). soo.... during the defense i actually felt like answering as well... just when they asked about "my" chapter... of course i could not have done it better than tim did... :)
it was a very nice day and evening. but exhausting!!
Tweet
Pin It
Labels: CaT, the netherlands, tim, tradition
Posted by CaT at 5:08 PM

YYYAAAAAYYYYYY!! This is a very big accomplishment. Tim must be proud.

I found your explanation of the Dutch academic process most interesting. A paranymph? It is SO tempting, but I'm not going to comment on it.

Tell your sister she got a great photograph.

You look both so nice, so different from when I met you...It is a milestone Tim has reached here and so nice you were his paranymph. Congratulations to Tim!

Bravo! I'm so glad to see a shot of this great event! (I had no idea that the dress code was so formal.) Congratulations, Tim! I hope I never need a transplant but am delighted you've contributed so mightily to improving the process.