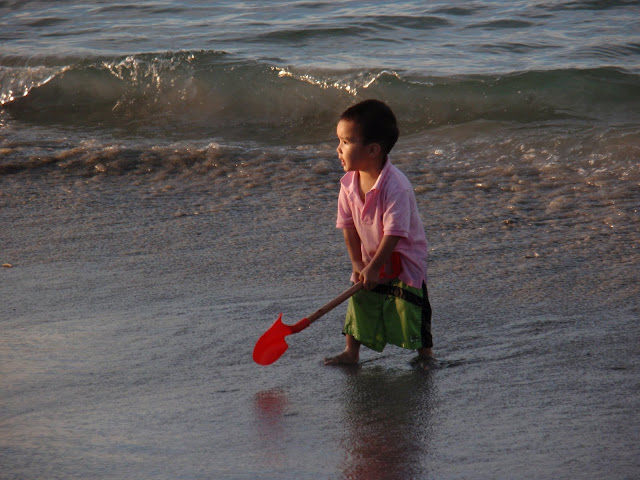 this picture was taken 2 weeks ago, at Nantasket beach, while i was sitting in the lifeguard chair. this boy was sooo cute! there was actually a huge family, and everyone was playing and chasing each other in the water. the youngest of the family however was just mostly observing them, standing there with his red shovel, in which he was most interested... i took many pictures of him, hopefully unnoticed by his mom.. :)
many beaches are closed, or rather, you are strongly advised not to go into the water, due to too high bacteria levels. as stated in a newspaper: "Officials dealing with closed beaches said the high bacteria levels were likely caused by heavy rains washing contaminants into swimming areas." or, in other words: due to huge amounts of rain in a short amount of time, waste pipes overflow and everyone's waste (i.e. shit) gets into the water. yegh....
no, i have not been in the sea yet, and havent been tempted to do so either (the water is much too cold!!). besides, just came across an article about Massachusetts shark sightings...
Tweet
Pin It
Labels: beach, cute, photographing strangers
Posted by CaT at 7:38 PM