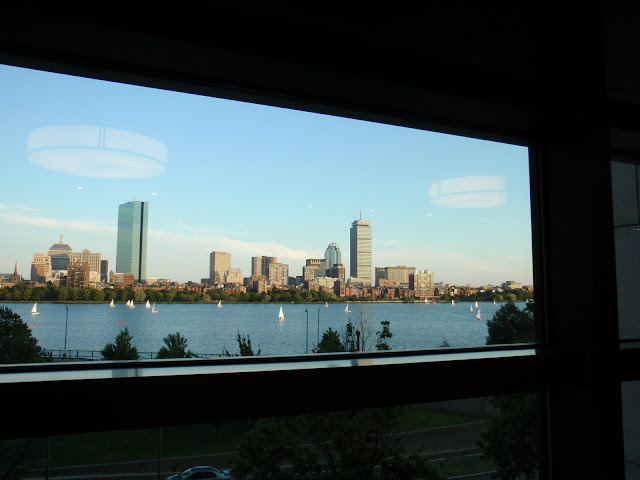 yesterday we went to a "networking seminar". in fact i was not aware that the purpose of the meeting was to network, i was just interested in the topic presented. the presentation was good, however short and very much about protein structures, but i learned something new. besides, it was in a very very fancy building with extremely expensive furniture and very nice glass-walled seminar rooms. the view over the Charles river (see above) was beautiful. we were only on the first floor, so higher up would be even more perfect.
surely it was not a research building. i just discovered Microsoft is in there so i assume the space we were allowed to use was from microsoft. interestingly, i also found out that there are City rules preventing Microsoft from putting up their logo atop the building; it would ruin the beautiful skyline along the Charles river (article in boston globe)
after the seminar was done and all the free pizza (but cold) was finished, everyone left rather quickly; i dont think much networking has occurred. surely i will attend the next seminar as well, if only for the fancy building! :)
Tweet
Pin It
Labels: charles river, seminar
Posted by CaT at 5:24 PM

there are ufo's there