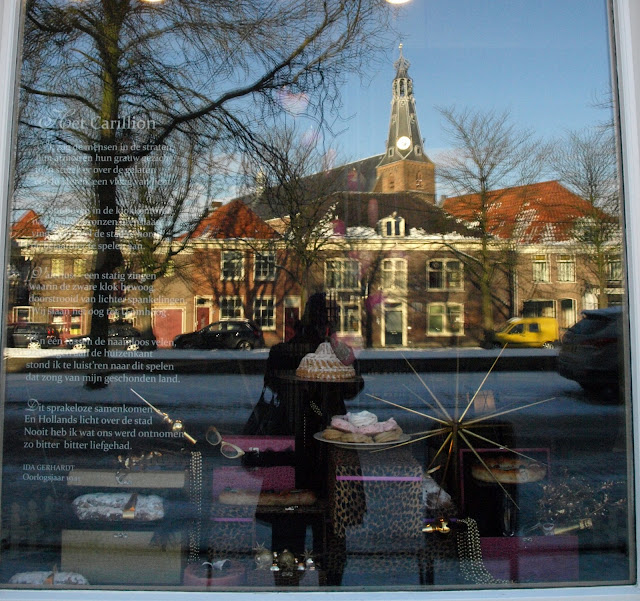 unlike americans, the dutch take 2 days to celebrate christmas... recently, more and more shops (especially in amsterdam and big supermarkets) open at least at the second day. i walked around in my hometown today with my sister and big fancy camera; but most pictures i took turned out to be very disappointing. this is a reflection of myself in the window of the bakery in the center of Weesp. behind me one of the many churches, and on the window a poem from the dutch poet ida gerhardt. i just looked up the poem and its a very nice, apparently very well known poem... i searched everywhere for an english translation, but couldnt find a complete one.... :( but this is a good description i stole from here: "She sketches the sense of hope and beauty she experienced when she heard someone playing the bells of a nearby church. The time was 1941, the place: her city of Rotterdam, bombed the year before. She saw the people in the streets, their faces grey with misery; then, suddenly, the heavenly sounds coming from high up, from the church belfry. Their faces lightened up; the very sound of chimes filled them with awe and wonder. They looked up and listened, enjoying the marvel of the carillon – that most Dutch of all musical instruments." for the entire poem in dutch, go here.
meanwhile, it has been snowing in boston (buuuh, i missed that), and a blizzard has arrived; new york city cancelled 1000 flights... good i have 1 more day in the netherlands.....
Tweet
Pin It
Labels: the netherlands, tradition
Posted by CaT at 5:57 PM

A bakery with a poem on the window, that is special. A literature lover I suppose. Things don't look to well for your return flight. Take a sleeping bag with you for the hours on the airport...

Very cool shot, a lot going on there. I don't envy you with your flight back! Good luck.

as it turned out, the only delay you had was having to wait for me getting the car, because the amount of luggage we had was not suitable for a subway ride.