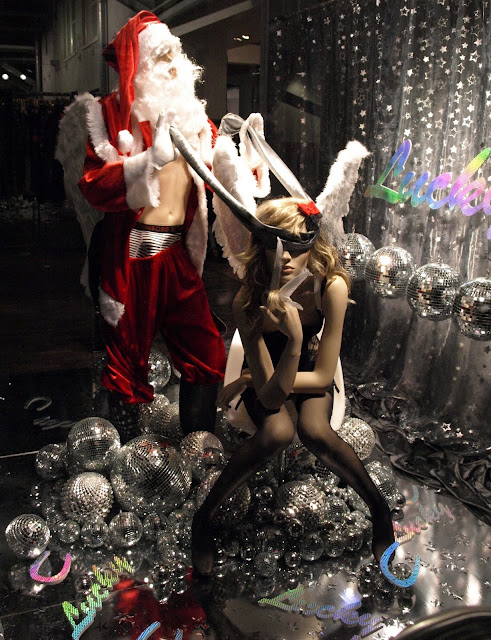 maybe im oldfashioned, but i think its weird i now already saw 2 shops portraying santa in a not very child-friendly way... previously we had freaky santa in boston, and now, as the shop decorated, lucky santa in utrecht...
as mentioned yesterday, the dutch have 2 christmasdays... googling around taught me that we used to have even 4 christmasdays in the year 813, as determined by the catholic church... on those 4 days you were not supposed to work as that might cause bad luck; only work that really had to be done was allowed. christmasday one was a "gezellig" (cosy) feast at home with family, day 2 a bit more festive and was called the big horseday (eh?); farmers would go around on their horses and this would protect the horses against diseases. the 3rd day to commemorate the saint of friendship, and the 4th day was for children; they were in charge this day.... soon, the 4th day disappeared (why?), and then in 1773 also the third day was no longer a holiday. but only since 1964 the dutch consider the 25th and 26th as official holidays... the second day now usually spent at a "meubelboulevard", i.e. home furnishing shops..... (why oh why??!)
Tweet
Pin It
Labels: the netherlands, tradition
Posted by CaT at 5:22 PM

Well Santa does obviously other things than Sinterklaas. To spent the second Christmas day in a home furnishing shop is such a sad pastime here.

Santa looks like he's packing a little something in that shot. Maybe it's a shadow.

HAHAHAHAHA..
na... i guess i know what you are talking about. and thats not a shadow... (there was also a sign at the shopwindow that it was only for 18+)

this is actually a pretty cool picture, seeing it again now