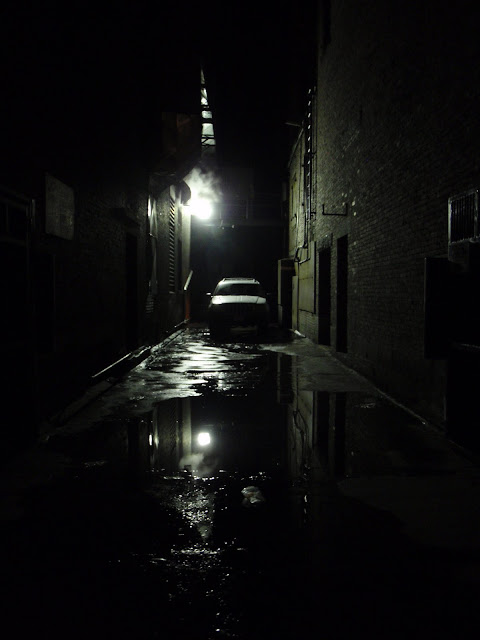 the dutch call the last evening of the year old year's eve, whereas in english its new year's eve, something i never understood.... anyways.. we dressed up and were just in time to see the last bits of the fireworks for children at the boston common (at 6.45 this evening...). we then wanted to have dinner at a certain place, but to get in you had to prove to be above 21, which we could not (tims dutch driver's license wasnt accepted and i did not have any official form of ID, however, if they just had looked at us, it would have been clear that we passed 21 already....). so we went to the next place and there we could have dinner, but could not drink alcohol for the same stupid reason... then we had free espressos at a very fancy hotel-restaurant (after asking twice and waiting much too long the check might have arrived after our leaving.. :) )
we walked around a bit in boston, i tried to picture real american girls with impossible high heels and extremely short skirts, but the alley with car turned out much better.... :D
now we are at home, and in 20 minutes the new year will start! this year a lot of exciting things happened, most importantly our move to the US! now lets see what 2011 will bring..... surely i will document parts of it here, as i very much enjoy posting one picture a day.
happy new year!!!
Tweet
Pin It
Labels: boston common, boston streets, frustration, tradition
Posted by CaT at 11:46 PM

Best wishes to you too. That is a dark alley, with only one spot on, nice photo. What a stupid rules about the I.D. I guess you don't look like a 18 years one.

yeah, the pic is great. Im so happy i pointed it out to you to take a picture there.. hahaha.

We will get our 'liquor ID' (official name!) soon enough. xx

thanks all!
and yes, it was tim who saw the alley... but.... me who took the pic... :D
actually we both took several pics, but the very first pic, as usual, turned out to be the best...