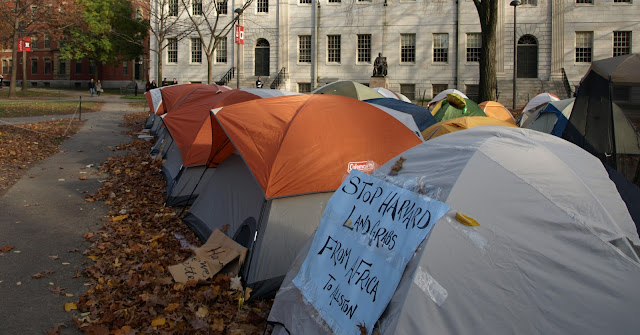 since november 9, harvard yard is "occupied" as well. some 30 tents have been placed right in front of the famous statue of harvard (see above). in reaction to this, the harvard administration closed the gates of the yard (they are so lucky to have it totally surrounded by gates!!), allowing entrance to only those with a harvard ID. well, arent we privileged, both me and tim have such an ID, and thus we went to the yard this beautiful saturday afternoon (while we had absolutely no business there other than to feed our curiosity). normally, this place is full with tourists, so in that respect it was really cool to be there... as one of the very few... :) while we were photographing around, we saw the real tourists behind the gates, most likely wondering how the hell we managed to get in.
and yes, there they were. the tents.... looked pretty cute. but i wonder how many "occupiers" were actually present. we saw 2. and 30 tents. the other occupiers were most likely enjoying the harvard-yale game, those 2 told us. well... is that really necessary? arent they there for a cause? is watching sport helping their cause?! i dont think so.... but... usually there are around 12 of them protesters they assured me! (12!!) i also asked them WHY they had put up tents there, as for me it seems like they want to separate themselves from the occupy boston at dewey square. i did not get a satisfying answer, but part of it was.. "some had never been there, and we want to make people aware everywhere, also here.. and its easier because we work around here, and its very dirty at dewey square... so many homeless, but mostly to make people SEE it also here..."
anyways. im wondering how long they will remain there in their little tents. and im wondering how long they will keep the yard locked. all those poor tourists... being denied their picture next to the harvard statue! perhaps the harvard administration did it to isolate those occupiers, being seen by harvard only, whats the use of their protest?
some people say those spoiled harvard students have no right to protest, as they are the 1%.  attenting harvard costs you approximately 56,000 dollars per year (!!!). who can afford that? but.... around 70% of the harvard students receive some form of financial aid (more here). well, the harvard occupiers want a university for the 99% (as you can read here). but.... i found this article in the harvard crimson that articulates very well whats wrong with exactly that: "occupy harvard seeks to trivialize the meaning of a Harvard education. In protesting Harvard as an instrument of elite financial oppression, Harvard students uncouthly slander the source of their financial aid, their educational experiences, and—most importantly—the abundant opportunities this institution provides them. For better or worse, Harvard students did not commit to attending a “university for the 99 percent.” EXACTLY!!! ah, and this article was very interesting too (and funny).
hmm... that was a long post. those occupiers get way too much attention. grrr....
Tweet
Pin It
Labels: harvard, real americans
Posted by CaT at 12:53 AM

I don't think a protest works this way. It looks more like a ANWB campingshow. You have to see and hear protesters.

HAHAHA . yes and at the ANWB campingshow you usually do not hear or see anyone.. :) i think the occupiers mean well, but it's not very political.

You can't walk away from a protest to watch sports. If you do so you will have to start all over again.

i agree! i think its so stupid.. they just put those tents up, but they are all empty! and what did they cause? that the largest tourist attraction in cambridge is closed off.... (although the students living at harvard yard might actually be happy about that, finally some quietness.. ?)