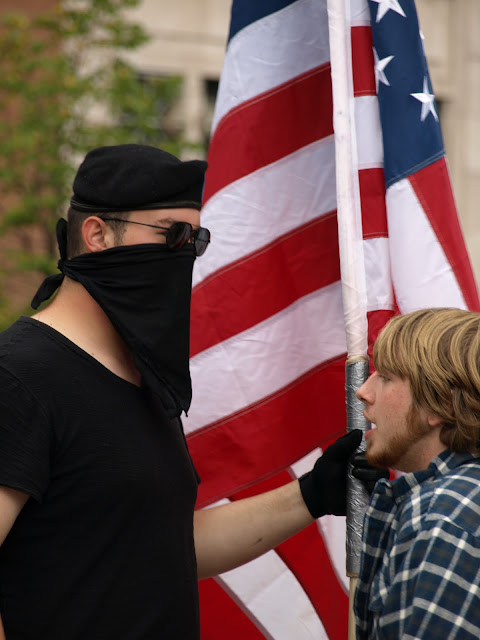 boston is still occupied, but the owners of the park now want them out.... i guess sooner or later they will have to go, just like in other cities. on their facebookpage they ask for warm coffee and pizza, but then other occupiers complain that they dont want pizza but rather have vegetables... blabla. just go home and cook something yourselves! and if you really want to make that change... take a homeless with you and feed him as well. grrrr... but who would do that?!
anyways... the first time we went there we saw several occupiers with their faces covered, as above. this is because there are so many people with cameras.. and they dont know where all those pictures end up, and some are afraid to loose their job for identifying themselves with the occupiers.... they are afraid to be filmed by policemen who might use that footage against them later on... etc etc.
they should all just go home!
Tweet
Pin It
Labels: boston streets, photographing strangers
Posted by CaT at 12:22 AM

Yes it is a weird action, nobody really knows what it is about and they can't explain in a proper way.

Here, here CaT. the Vancouver camp has to move on Monday by 2:00 but it may or may not go smoothly. I have no time for anyone who wears a mask at these events.

lets see what is going to happen...
i too think the masks are stupid

I think there might still be a few protesters in Stockholm, but I'm not sure. They did help save an old oak last week, the tree dates back to the Viking Era and is half dead and the authorities wants to cut it down, but since a few weeks back people are guarding it 24/7.

well then they did something useful!
although a big half dead tree might be dangerous during storms, no?